Once again, because we are gluttons for punishment, your pals from ToughPigs attended the annual Toy Fair (as we have almost every year since 2008) to catch a glimpse at all of the Muppet, Sesame Street, and Henson Company merchandise coming to toy store shelves in the next year.

I say “gluttons for punishment” because we’re often disappointed at the lack of Muppet toys.  Previous years were especially bleak, considering the small amount of new Muppet stuff in preparation for Disney’s theatrical Muppet films.  This year, there’s nothing quite so huge to promote, so our expectations were a little lower.  And we were rewarded with a good mix of exciting stuff, the same old merch, and a few surprises. 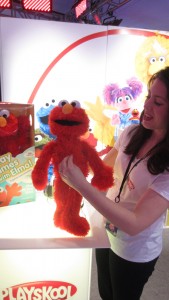 Starting at the Hasbro showroom, which is off-site from the rest of Toy Fair and accessible by invitation only (or by sneaking in through the ventilation ducts, as we did), we saw the latest Sesame Street swag.  The feature toy was “Play All Day Elmo”, and it very well might take over the world, Terminator-style. 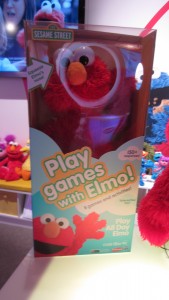 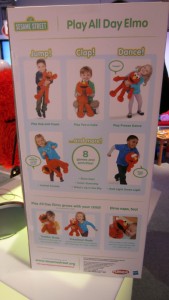 As demonstrated on the box, Play All Day Elmo knows when you’re holding his nose, making him clap, holding him while you run or jump, and he knows when you’re playing the games he’s suggesting through his realistically-moving mouth.  I am not 100% convinced that it isn’t sentient, so maybe hide him in the closet while you sleep.  In all seriousness, the technology for these toys is out of this world, and it’s hard not to be impressed by what can be accomplished with a toy like this. 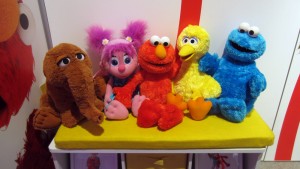 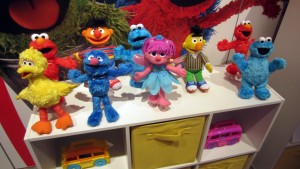 There wasn’t much else new to us at Hasbro, apart from some bath toys and a cute briefcase-style box that holds letters of the alphabet.  Above, you’ll see some of the plush available, including the larger stuffed animals, which includes the giant Snuffy doll that we saw last year and I promised myself I would buy.  Because look at him!  LOOK. 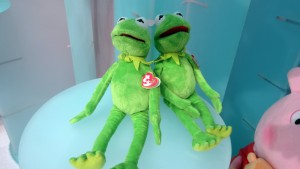 Ty, the toy company that had a huge Kermit the Frog display last year, relegated their two last Kermits to a shelf hidden amongst their huge stuffed animal collection.  It was sad seeing these two little guys nearly forgotten after getting such a great spotlight last year.  Maybe Ty is hoping the loneliness will bring them together so they can copulate and multiply.  Weird, but slightly less depressing. 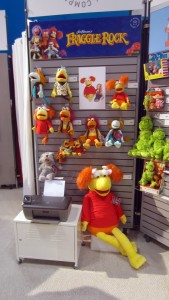 Also with nothing new is Manhattan Toy, the company who seems to be single-handedly keeping the Fraggle Rock franchise from dying out.  Their Fraggle dolls and puppets continue to be the only Fraggle Rock merchandise we could find, even though we have word that some of the toys (like Junior Gorg, Traveling Matt, and [surprise surprise] Mokey) have been discontinued.  That giant Red doll looks like she just heard the news, and is exhausted from holding up the fort for the past six Toy Fairs. 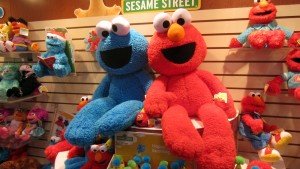 Aside from Hasbro, the other big Sesame Street licensee is Gund, who handles most of the plush toys.  The highlight of their booth were these HUGE versions of the Elmo and Cookie Monster “Take Along” dolls.  They’re just as soft and cuddly as the rest of the line (which includes normal-sized versions of Snuffy, Abby, Zoe, and more), but just a little less portable. 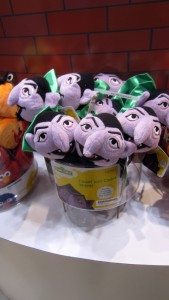 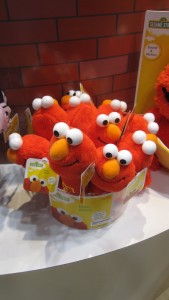 These thingamabobs are called “Wavers”, and they’re like wands that speak when you shake them.  Elmo says a letter of the alphabet each time you wave him, and the Count (voiced by Jerry Nelson!) counts all the way up to 20.  They’re actually really cute and probably affordable, so they’ll make great gifts for the Sesame fan in your life who has enough plush. 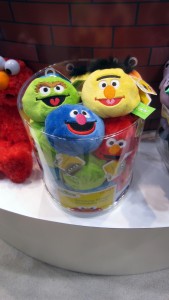 I also really liked these beanbags.  I know, they’re just regular beanbags with the characters’ faces on them, but there’s something charming about the simplicity of it all.  Gund could slap a Grover face on a shovel and I’d still want to buy it. 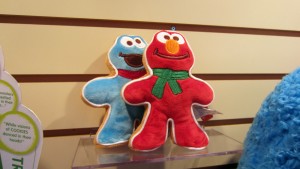 Gund also had these supercute gingerbread men, obviously because they’re trying to corner the stocking stuffer market.  What aren’t you telling us about your master plan, Gund??? 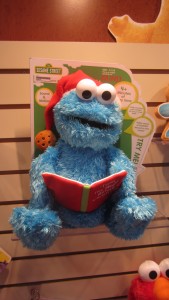 The coolest thing at the Gund booth was this Cookie Monster toy, which reads “‘Twas the Night Before Christmas” in its entirety out loud.  But not just that, the head sways back and forth to make him look more alive as he’s reading, and the mouth moves along with the words (as opposed to just flapping open when there’s dialog).  It’s actually really impressive, and the closest you’ll probably get to having the real Cookie Monster read you a bedtime story. 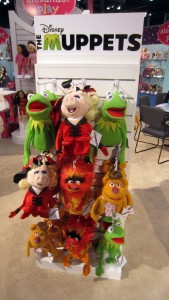 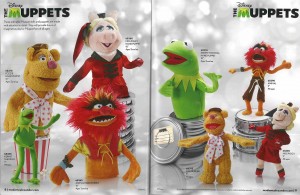 Madame Alexander had a pretty impressive and surprising display of new Muppet toys last year.  The puppets (which we reviewed a few months ago) were on display, but no sign of the full-bodied dolls.  Luckily, they were in Madame Alexander’s catalog, and we were pleased to see that the designs (especially Animal) have improved greatly compared to last year‘s prototypes. 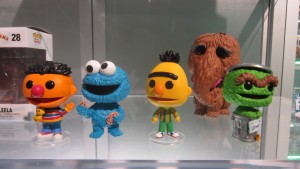 Our favorite toys on display this year were the Funko Sesame Street figures!  We spotted the Super Grover at New York Comic Con (which we’ve been assured will be released with the first wave of these toys later this year), but five more were available for our gawking purposes at Toy Fair. 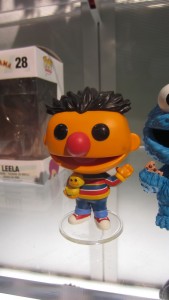 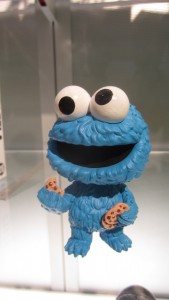 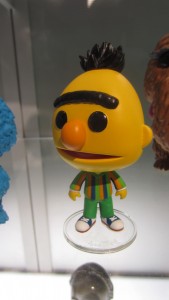 Bert’s looking a little worried, but he shouldn’t, since he’s nailing that unibrow look. 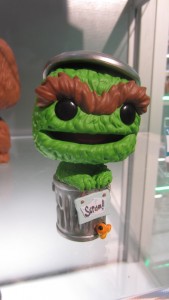 Oscar, looking as trashy as ever, with Slimey at his feet. 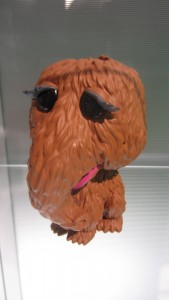 The most awesome one has got to be Snuffy.  It’s hard to tell, but Snuffy is actually a couple inches taller than the other figures, making him look massive in comparison.  And all is right with the world. 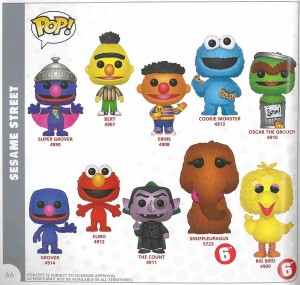 The Funko catalog shows off the entire first wave of Sesame toys, which also includes Grover, Elmo, the Count, and a 6″ tall Big Bird.  I don’t know about you, but I can’t wait to see these guys in the flesh.  I mean, felt.  I mean, vinyl.

The absolute biggest news out of Toy Fair comes from Diamond Select.  They’ve got two huge Muppet lines coming, but unfortunately, they did not allow for photos.  It was very clandestine, as the Diamond representative showed us the prototypes behind a black curtain.  Thankfully, we took some good notes, and we’ll share as much as we can with you.

Their first line is a new series of Muppet Minimates.  Minimates are small figures, usually sold in two-packs, with simple molds and a few points of articulation.  The full Muppet lineup includes: Kermit the Frog, Miss Piggy, Fozzie Bear, Scooter, Robin, Camilla, Gonzo (with a daredevil costume variant), The Swedish Chef (with a “culinary catastrophe” variant), and Bunsen and Beaker (with explosion disaster variants).  The toys will also come with some accessories.

Also from Diamond is a line called Muppet Select.  These toys will look much closer to the puppet designs, and will be in scale with the other “Select” toys from Diamond (including, for example, the Marvel Select action figures).  We were able to see sculpts of the Kermit and Fozzie Bear toys, and their designs looked incredibly spot-on.  They’ll definitely be a great upgrade from the Palisades figures.  The Muppet Select toys will be sold in two-packs and will also contain accessories.

Of course, we’ll share photos and additional information about the Diamond Select toys once they provide us with them.

There was more to see, especially some assorted Sesame Street merchandise, but we decided it wasn’t worth our time to catalog every little thing with an Elmo face on it.  However, it was worth the time of the Muppet Stuff blog, and you can see the stuff we missed over there.

And as always, we’ll end our Toy Fair coverage with our wish for more cool Muppet stuff next year!

Click here to peek behind the curtain at the ToughPigs forum!