Another Pile of Emmys for Sesame Street! 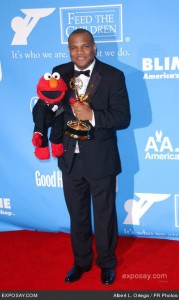 Sesame Street won EIGHT Daytime Emmy Awards!  The first seven were announced last week at the non-televised ceremony, which is exactly why none of us actually watched the official ceremony this past weekend.  And the winners are:

We also hear that Abby Cadabby and Oscar made some red carpet appearances.  When we find those videos, we’ll be sure to link to them here.

But here’s one video we did find! Oscar and Anderson Cooper joined forces to present the award for Best Lead Actor, and Oscar goes on to bite the hand that feeds him.  In song.

Congrats to all of the Sesame Street Daytime Emmy winners!

Click here to sink into your golden trash can on the ToughPigs forum!

CBS This Morning Learns About Puppetry on Sesame Street