Hey, Elmo’s been trending on social media! All last week! For Muppet fans, that’s exciting simply because we like Elmo. But that’s not the only reason it’s exciting. It’s also exciting because it’s representative of a recalibration of the way the general population responds to Elmo.

Wait, hold on! I promise this article won’t be as boring as that sentence. Here, let’s start with some video clips!

As far as I can tell, this whole thing happened because the denizens of TikTok and Twitter became smitten with three specific bits of Elmo fun.

First, there was this clip from a recent episode of Sesame Street in which Elmo, Rosita, and Hailee Steinfeld sing about using their problem-solving skills to make a tower of blocks taller after they run out of blocks. For some reason, people who watched this clip were highly amused by the way Elmo says “a paper towel roll”:

I kind of get it. Elmo certainly infuses those words with more attitude than most people do when they talk about paper towels.

Then there was this clip from an appearance on The Tonight Show Starring Jimmy Fallon when Elmo was promoting his cookbook. For reasons I find more inexplicable, people who watched this clip were highly amused by the way Elmo says “balsamic vinegar”:

But the big one, the main reason casual Sesame Street fans have been a-twitter about Elmo is… a running gag from the show that started about 20 years ago. Yep, January 2022 was when the world found out about Elmo’s long-running vendetta against Zoe’s pet rock, Rocco. I think this was the tweet that kicked it off:

It led to some sarcastic tweets by Elmo himself, a surprisingly menacing tweet by Dwayne “The Rock” Johnson, and lots of coverage on pop culture websites and even TV shows.

Yes, for those of us who are in the know and totally hip to Sesame Street, Rocco is old news. While researching this article, I even found a thread from the Tough Pigs forum from almost exactly one year ago in which we were all sharing our love of Elmo’s hate.

But you know what? I’ve decided not to be all hipstery about it. Although it’s technically accurate that I liked Rocco before he was cool, I’m happy that so many people are discovering that lovable little paperweight. Especially because it involves Elmo, who has often been looked down upon by snobs who grew up watching old-school Sesame Street.

And then I realized: The fact that this is happening at all indicates a generational shift in the way Elmo is perceived.

See, there’s a group of former Sesame Street viewers who can’t stand Elmo, usually because they believe he “took over” the show and fired Grover, or some nonsense like that. Elmo has been a prominent character on the show since the mid-to-late-1980s, but most of these Elmo-Hating Haters (or “EHHs”) grew up watching the show in the 1970s or early 1980s. At this point, the EHHs are in their 30s, 40s, or even 50s. They’re old fuddy-duddies! Maybe they drifted away from Sesame Street when they aged out of preschool, and they were surprised to learn, years later, that some new furry red kid had become hugely popular with the children of the 1990s. And maybe they reacted with suspicion, like fuddy-duddies do. To many of these middle-aged EHHs, Elmo is a usurper.*

But here’s the thing: The fact that Elmo has been one of the central stars of the show for well over 30 years means that now there are thousands (millions?) of grown-up adults for whom Elmo has been an essential component of Sesame Street since before they were born. There are now college graduates who have never tuned into a new episode of Sesame Street without an “Elmo’s World” segment (or “Elmo the Musical,” for a few years there). These are the Pro-Elmo People (or PEPs).

And what happens when people who used to be children reach their late teens and early 20s? They get nostalgic for the media they consumed when they were little, and they look back at it, and they find new things to appreciate about it.

For several generations, young adults would regularly rediscover Looney Tunes and realize how brilliant those old cartoons were. In the 1990s, there was a whole lot of retro-nostalgic discourse devoted to Scooby-Doo. And the same thing happens with grown-up former Sesame Street viewers.

When folks who grew up with old-school Sesame revisit the stuff they watched as toddlers, they’re likely to gain a new appreciation for the original version of “C Is for Cookie,” or realize that Bert and Ernie were genuinely a hilarious comedy team, or become struck by the revelation that Big Bird’s friends failing to see Mr. Snuffleupagus for over a decade was infuriating.

Now here we are in 2022, and we have adults who grew up with the Elmo-centric Sesame Street. As dictated by tradition, the PEPs, whose parents fought other shoppers to get them an original Tickle Me Elmo are looking back at the stuff they watched at toddlers. And they’re realizing… Elmo is occasionally really, really funny, and not just on a preschool level.

He always has been, of course. Not in the exact same way as Cookie Monster or Guy Smiley, but funny in his own way. He’s generally at his funniest when he’s doing a talk show appearance and he can really cut loose – the sassy, snarky side of Elmo was firmly established during Kevin Clash’s tenure with the character and has been brilliantly carried on by Ryan Dillon. He’s also at his funniest when he’s expressing pure exasperation over Zoe’s bizarre fixation on Rocco.** (Wait a minute… He’s at his “funniest” in two different scenarios? Doesn’t one of have to be his second-funniest? No. They are both his funniest.)

Yeah, Elmo can be hilarious when his performer and the writers really want him to be. And now thanks to Generation Z, the whole world knows it.

Oh, and it’s also thanks to Rocco. Say “Thank you” to Rocco, everyone.

By the way, I considered calling this article “The Elmossance,” but I resisted the temptation. You’re welcome.

(*For more on the issue of whether Elmo “ruined” Sesame Street, see my my now-legendary 2015 article “Nah, Elmo Didn’t Ruin Sesame Street.”)

(**Sadly, the Rocco/Elmo dynamic hasn’t surfaced on the show for several years now. I hope this viral moment inspires them to bring it back!)

Thanks as always to Muppet Wiki for images! Click here to argue that IT’S JUST A ROCK on the Tough Pigs forum! 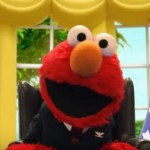 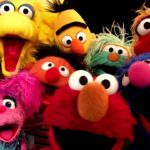