Elmo and Murray in the Great Outdoors

Summer’s here, and that means it’s vacation time. And in a new series of videos, the Sesame Street folks are sending Elmo and Murray to some national parks in an attempt to convince kids that it’s fun to get off the couch and go outside.  The program is called “Sesame Street Explores National Parks,” and you can check it all out on the official Sesame Street website.  You can also watch the first video below, in which the two monster dudes learn about birds and their nests from a friendly park ranger:

Well? Did it make you want to go outside and learn about nature?

Of course, these videos are also notable for being the first major Sesame project to prominently feature Elmo since the departure of Kevin Clash. There’s no official word regarding a recast, but we’re pretty sure Sesame Street puppeteer Ryan Dillon performed the little red guy for this video. Stay tuned for more bird-watching action! 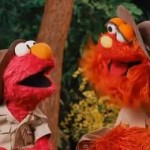 Thanks to Tough Pigs’ own Kynan Barker for the alert! Click here to flock together on the Tough Pigs forum!

More Elmo and Friends at the Olympics

Abby and Gordon and Friends Spent Easter at the White House