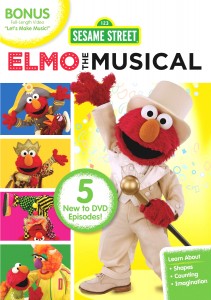 After a successful out-of-town run on PBS, the Sesame Street Theater Company’s production of Elmo the Musical opens next Tuesday on DVD, a venue that suits it well.  The production stars Elmo Monster, a performer perhaps best known for headlining a multimedia variety show inside a crayon drawing.  Surprisingly, his frequent costars (Grover Monster, Cookie Monster, Telly Monster, Abby Cadabby who is not a monster) are nowhere to be found, leaving the eponymous star to carry the entire show.

Sesame has arguably created a new kind of theatrical experience here, as Elmo the Musical is, in fact, five one-act musicals, all featuring the same lead.  The mind reels at the possibilities of such a format.  One can only imagine the entertainment value of Bernadette Peters starring as Annie Oakley in Annie Get Your Gun, Rose in Gypsy, the Witch in Into the Woods, Marie in Sunday in the Park with George, and Javert in Les Miserables, all in a single marathon evening of theater.

Elmo further distinguishes itself by casting the audience in a supporting role in each of its five shows.  I was startled when, in the opening scene of Athlete the Musical, Mr. Monster informed me that I would be playing the role of his coach, without even so much as asking whether I was an Equity member.  After portraying a ship’s first mate, the vice president, a cheering crowd, and the captain of the guard, I was ready for a nap, while simultaneously relieved that I never missed a cue (When Mr. Monster told me to count the sides and angles of an octagon, I didn’t miss a single one). 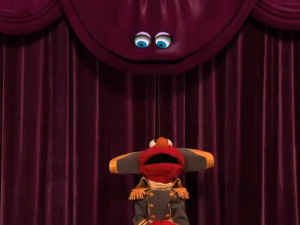 Another common thread uniting all five is the presence of Velvet, who I believe is the first sentient theater curtain I’ve ever seen.  Velvet often appears in moments of potential danger to express concern for Elmo’s well-being, which is certainly behavior atypical of a curtain.  Still, though lacking the delightful whimsy of Elmo’s past co-stars Mr. Noodle and Mr. Noodle’s Brother Mr. Noodle, Ms. Velvet serves as a worthy companion on Elmo’s adventures, and I predict a bright future for her, appearing in front of stages all over the Great White Way.

The titular star of the show takes on a variety of roles throughout the performance.  Opener Athlete the Musical finds Elmo competing in a bizarre version of the Olympics, in which the prize is a pair of shiny golden shoes, and there are only two participants: Elmo, and a bulkier monster with the unfortunate moniker Enormous Athlete.  Elmo’s desire to win the shoes is practically tangible, highlighted by his ballad “Golden Shoes, Look at Them Glow.” (The title is also the entirety of the lyrics.) 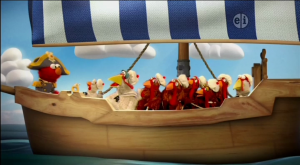 In Sea Captain the Musical, Elmo plays Captain Elmo, the commander of a vessel searching for Moby Pink, the pink whale.  Assisted in his endeavors by a crew of chicken sailors, Elmo encounters a ping-pong-playing giant octopus and a troupe of singing barnacles before recruiting the aforementioned whale to sing and dance with him in a closing number which I frankly found somewhat implausible.  Sea Captain also includes the line: “Anchors aweigh!  Oh boy, this anchor a-weighs too much.”

The plot of Circus the Musical is vaguely reminiscent of the cinematic classic Big Top Pee-wee, only without Kris Kristofferson.  Here, Elmo plays yet another character named Elmo, who dreams of joining the circus, but struggles to find a job he’s skilled at.  I found Elmo’s character in this story to be quite sympathetic – who among us hasn’t attempted to leap between two cactuses, only to land on top of one?  He’s upstaged, though, by talented chicken who clucks her way into our hearts. 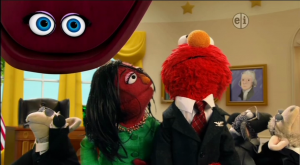 President Elmo is the best of the selections presented here.  The premise is simple: What if Elmo was the president, and the White House was red instead of white, and the Secret Service was all sheep, and the first lady went missing, and so did everything that’s the first of something?  I suppose simpler premises have been seen, but President Elmo flies by with comedy, suspense, and a touch of political intrigue as the Monster-in-Chief takes the law into his own furry hands to solve the mystery.

Prince Elmo the Musical casts Elmo not as the “Purple Rain” singer as I initially hoped, but as the prince of a kingdom who is called upon to liberate the nearby town of Tottentot from a dragon with extremely bad breath.  The little red prince’s circuitous journey involves climbing over a burping hill of beans, walking under five friendly frogs, passing through a hiccupping hoop of ballyhoo, and eating garlic and limburger to make his own breath even worse than the dragon’s.  It’s certainly a tale free of clichés. 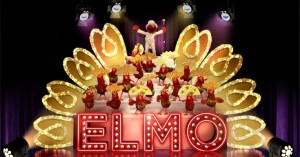 Overall, Elmo the Musical is an impressive undertaking.  The volume and speed of set and costume changes is head-spinning, and though I neglected to count how many songs are featured over the course of the five shows, I suspect I would have quickly lost track.  Each musical is packed with new original songs of all different genres and styles, some sung by barnyard animals.

Elmo the Musical is a far cry from the bare-bones productions the Sesame Street Theater Company is known for, and which many older audience members feel a great sense of nostalgia for.  The bright colors, fast pace, and onslaught of songs and computer-generated imagery may be overwhelming to some, to those who believe there is no entertainment superior to Elmo’s colleagues Bert and Ernie playing a rhyming game on a simple living room set.  But as long as Sesame remains committed to producing a variety of material, the audience should keep coming back.

BONUS: As if five Elmo the Musicals weren’t enough, the DVD also includes an entire old direct-to-video special called Let’s Make Music, which is fun and cool and features the cast of Stomp and includes a sketch where Bert tries to make a sound like a tuba.

Elmo the Musical will be released on Tuesday, May 7th. Click here to sing the eleven o’clock number on the Tough Pigs forum!