Muppeteers at Dragon Con 2015 (or, How I Cried In Front of Oscar the Grouch)

The following article was written by our Atlanta correspondent and an old friend to the ToughPigs community, Barry Lee. Many thanks for your hard work, Barry! 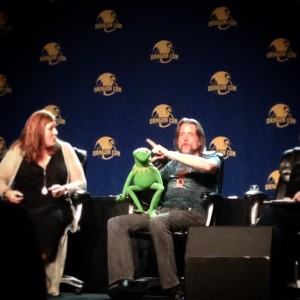 I’ve lived in Atlanta now for about 6 years, and have always heard about Dragon Con but there was never really anything piquing my interest enough to go until this year. As a child I grew up with some medical issues.  Born deaf, I had to get a lot of surgeries at a young age and ended up with eight fingers. The Muppets for me were there during those tough times, they were also the one tangible thing I saw on television or film as a kid that I could relate to because they had the same amount of fingers as me. When I was three, I started sitting for hours on the floor drawing Sesame Street characters. I stuck with drawing from that point on and now drawing things is a career for me. To meet these folks who had literally shaped my life to where I am now was something I have always wanted, and when it was announced that a whole slew of Muppet folks will be there, I felt this was my chance.

Saturday morning I got up super early and picked up my tickets. I then stumbled upon the parade, as I wasn’t originally planning to attend. There were some pretty great overall costumes, and Caroll Spinney himself along with his wife Deb were in the parade in a nice bright yellow car. (I’m not a car person so I wouldn’t be able to tell you what kind of car it was, but I am sure everyone at ToughPigs isn’t truly dying to know the car unless it was Oscar’s “Sloppy Jalopy” — which it wasn’t.) 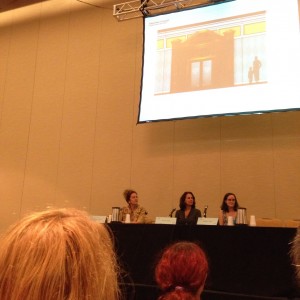 After the parade I scurried over to my first panel, “A New Home for the World of Jim Henson”, which discussed the upcoming Jim Henson wing at The Center for Puppetry Arts. This panel featured Henson Company Archivist Karen Falk and Cheryl Henson. Before the panel, Henson pointed out she was wearing one of the outfits from The Dark Crystal clothing line that was tied to the film during its release. The goal with the new exhibition is to chronologically tell the story of Jim’s life through an interactive exhibition featuring props and puppets. They played a video (which should be available online soon) about the process of the puppet restoration which was pretty interesting. I got some peeks at the characters to be used in the exhibition, including Fraggle Rock‘s Uncle Traveling Matt, Cookie Monster, Follow That Bird‘s Marie Dodo, and some Emmett Otter folks as well. They said it took them about two years to gather all of these items and transport them from New York to Atlanta. Unfortunately, I then had to sneak out a little early to catch the panel with Caroll Spinney. 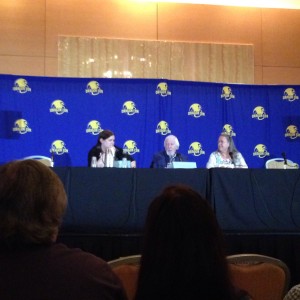 The line for Caroll was pretty nice but I did manage to get a good seat. The panel began with a trailer to I Am Big Bird, and then the moderator introduced Caroll and his wife Deb. They chatted a little bit about the film and then immediately went into a Q&A. Here are some little bits from that session:

It was awesome to see Caroll tell these stories and what was even better was just seeing the relationship between him and his wife (who are as sweet as they are in the film). Afterward I was pretty exhausted, but decided to swing by the Artist’s Alley. To my surprise, they had a preview of some of the Muppets on display for the upcoming exhibition!! No photos were allowed but the lineup included: Oscar the Grouch, Hoots the Owl, one of the “Java” characters, Kermit the Frog and Fozzie Bear.

Sunday morning started off really early for me, as I arrived at Dragon Con early to try to get my time to meet with Caroll Spinney. I went into the room and stood in line at the table, and after about 30 minutes with no Caroll, his agent came up to me and the two other people waiting in line. He explained that Caroll was doing photo ops (which I was hoping to do) and then after the panel he would be available. Not only that but then his agent gave us his card to which he said, “When you come back, this card will give you priority and I will make sure you meet him.” This was super generous. I quickly went over to my photo op which felt like I was in line to take photos for my yearbook (but for the best damn yearbook ever). Taking the picture with Caroll went by super quick! Then I dashed over to check out the panel “Caroll & Steve: The Early Days of Sesame Street” which was a real treat for me because I was intrigued to see these two talk to each other. 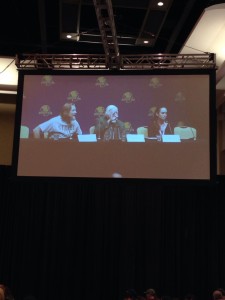 The panel had a really big line out the door and around a few blocks, it was great to see such love for Sesame Street and the Muppets. I still managed to find a really nice spot. The panel began and it was pretty amazing. I felt like we were a bunch of flies on a wall watching such a great conversation with two true legends of the business. Here come the bullet points again as to what they discussed.

Again, this panel was amazing and I don’t know when the opportunity to see this two together to talk about such stories again will be. After the panel, I went over to meet Caroll. I had drawn an illustration of Oscar to give to him as well. When I came up to the table, (which by the way the agent graciously stuck to his word which was so kind) I was face to face with Spinney and his wife. I told them about me and my work, how he was part of the reason why I am an illustrator today. I said, “I could relate to so many of your characters due to them having 4 fingers, when I was a kid” to which Caroll had responded, “Oh yes that was Jim’s nod to Walt Disney!”

I gave them my drawing of Oscar the Grouch and they loved it. When I was about to pay for my autograph Deb stopped me and said “No Barry, you gave us this great drawing as a gift so we are giving you this autograph as our gift to you.” That part literally almost made me crumble up into tears. So sweet, so generous and this was a moment that I would truly not forget. 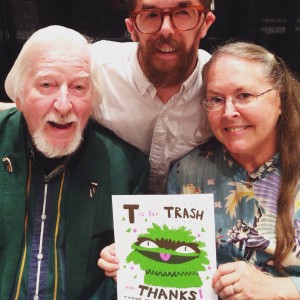 I headed over to Whitmire’s first panel after meeting the Spinneys. The panel was “Steve Whitmire: The Muppets 1978-2004”. I went to sit down and then all of a sudden Leslie Carrara-Rudolph and Pam Arciero sat right in front of me. I got to chat with them briefly which was a nice surprise. Whitmire came out wearing an old crew jacket based on Scooter’s jacket from The Muppet Show. Steve talked about his early years, and showed a few clips from The Muppet Show, Muppets Tonight, The Muppet Movie, and The Great Muppet Caper. He then went onto discuss the evolution of Kermit the Frog by showing clips from Sam & Friends, The Frog Prince, Sesame Street, The Muppet Show, and Muppet Treasure Island. But all of that was a blur, because next Steve reached from behind the table and brought out KERMIT THE FROG. 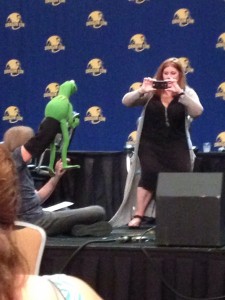 Naturally, the audience freaked out (including myself). It was not listed or publicized that Steve would bring Kermit at all, and even Leslie and Pam were both caught by surprise as Kermit’s appearance. Kermit took a Q&A with Steve and honestly I was so in shock and so in awe of watching Kermit the Frog live right in front of me that note taking seemed to just not happen. It was a surreal experience though, and it was amazing to see Steve bring him to life. Even when Steve would be discussing things Kermit would make subtle reactions. Just incredible.

While note taking seemed to be avoided during this panel, due to shock, I did make sure to take notes for the last panel with Steve discussing The Muppets. This was a panel with Steve Whitmire and the VP of The Muppet Studios, Debbie McClellan.

Steve seemed really excited about the new show, and from the sound of it the audience was abuzz as well. I also saw a few Muppet cosplayers including Kermit, Miss Piggy, Red Fraggle, Sweetums, Vampire Hunter Beaker and Floyd (which arguably was my favorite costume). While I didn’t get to check everything out at Dragon Con, this was an amazing experience for me that I would never want to forget. 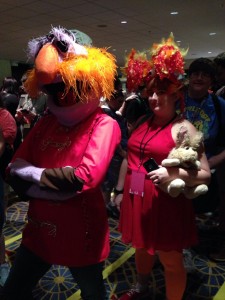 Click here to take your yearbook photo on the ToughPigs forum!