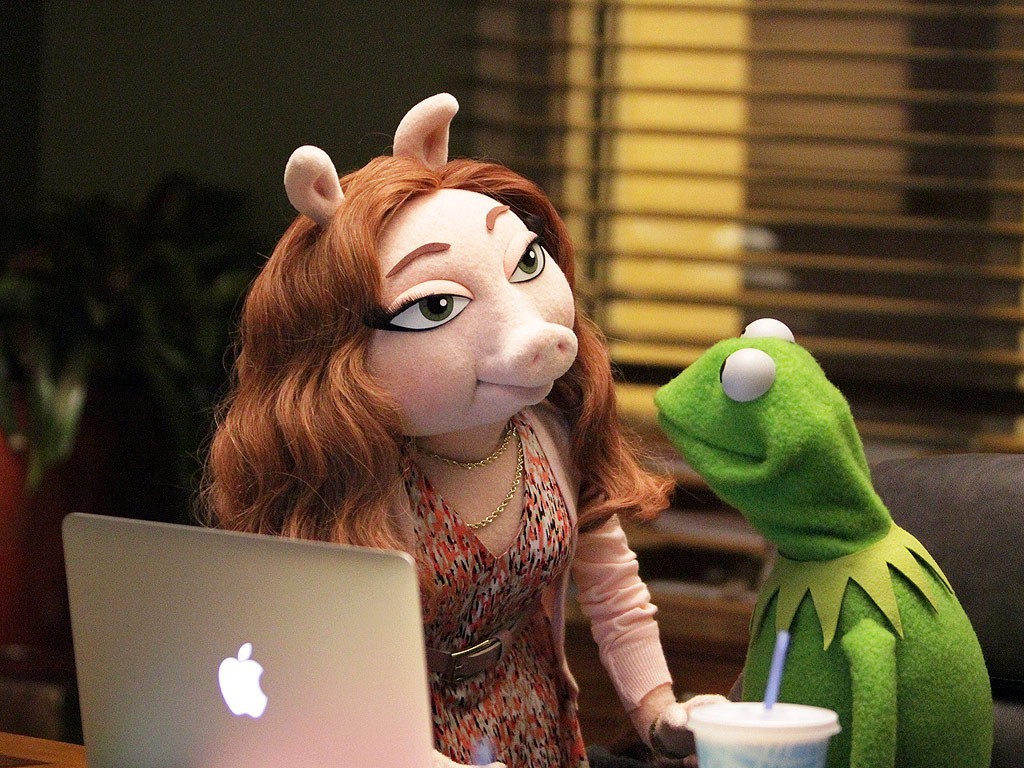 Earlier this week, the true face of Denise, Kermit’s new girlfriend, was revealed to the public.  And the public responded exactly as predicted: With a fiery rage and great prejudice and pure panic.

We have two photos and three silent seconds in a promotional video, so that’s plenty to go on to form some full-fledged opinions! 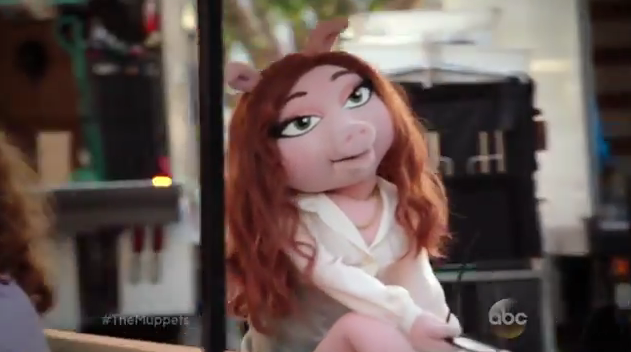 She’s a pig! There’s only room for one pig in the Muppets crew and that’s Miss Piggy.  Okay, there’s also Link Hogthrob and Dr. Strangepork, but they’re boy pigs, and we’re upset about lady pigs over here.  I mean, we’ve also had Annie Sue, Spamela Hamderson, Lydia the Tattooed Lady, and the giant ballet-dancing pig from the Rudolph Nureyev episode, but nobody remembers them.  I’m not sure if Miss Poogy counts.  And there’s probably a bunch of background pigs, like the kind that used to do musical numbers on The Muppet Show.  Nobody really cares about Andy and Randy, Spa’am, or Howard Tubman, but it’s okay if they’re invited to the party.  So other than those 20 or 30 pigs, no more! 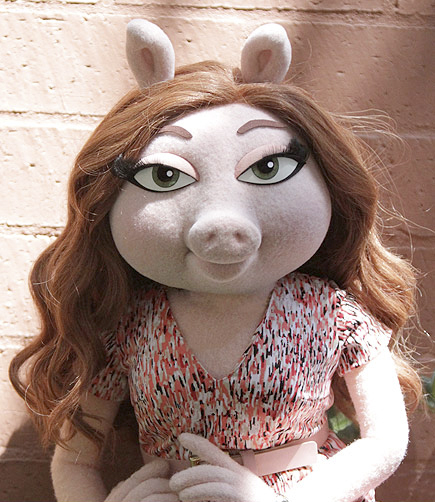 Who does she think she is, Miss Piggy??  What with her being a lady pig and all!  I mean, we technically don’t know anything about her yet except that she works in Marketing and she’s dating Kermit.  But it’s probably safe to make judgements about her personality based solely on her appearance, right? 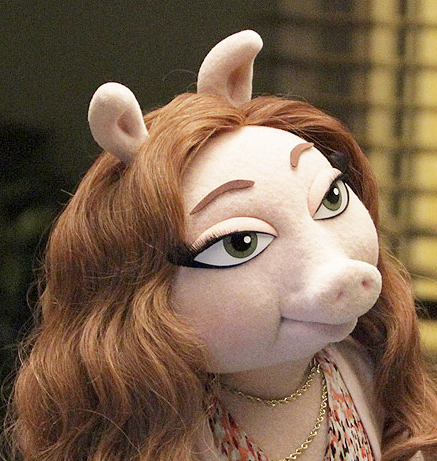 In the test pilot, they used the Spamela Hamderson puppet, but now she looks totally different!  They pulled the ol’ bait-and-switch, making us think she looked like one thing, but she looks like another thing!  A totally legitimate reason to get upset!

As Joan Rivers confirmed in Muppets Take Manhattan, pigs don’t have eyebrows.  So what is Denise hiding behind those thin strips on her forehead?  Anything could be under there!!  Weapons, drugs, secret plans for canceling the new Muppet show after only 9 episodes… anything!

Lookit her tiny nose!  It’s so little in comparison to Miss Piggy’s!  Do you know who else had a smaller-than-normal nose?  Voldemort.  Think about that, folks. 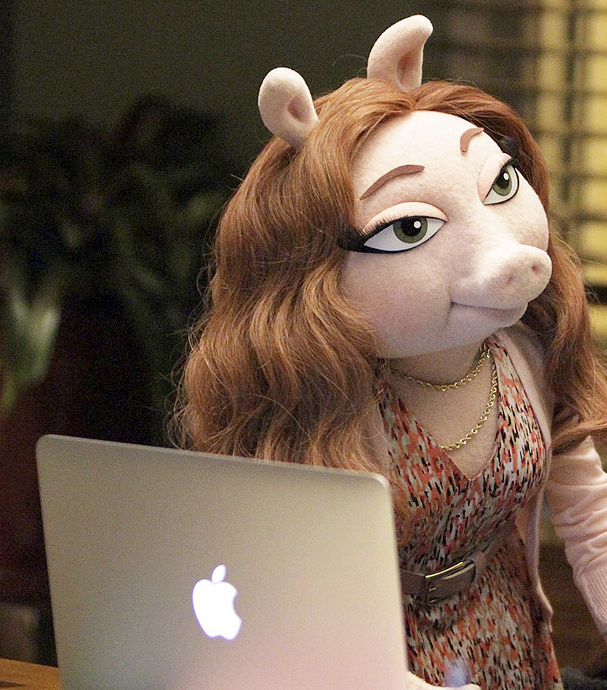 She’s a Mac user!  Kermit once made a living by teaching us Windows, and her blatant disregard for his personal history makes her a terrible choice for companionship.  It’s just rude, really.

No Glove, No Love

Unlike the only lady pig that matters, Miss Piggy, Denise doesn’t wear gloves.  So now we’re expected to believe that all pigs aren’t hiding hooves under their purple satin gloves?  She’s obviously some sort of mutant hybrid, who will attack at any given moment. 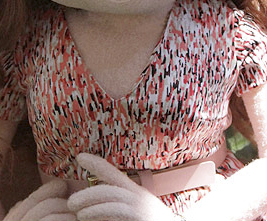 For Whom the Belt Tolls

That belt isn’t holding up or attached to anything!  It’s just creating a waistline in her blouse!  Is that a bad thing?  It seems like a bad thing.  I don’t know from fashion. 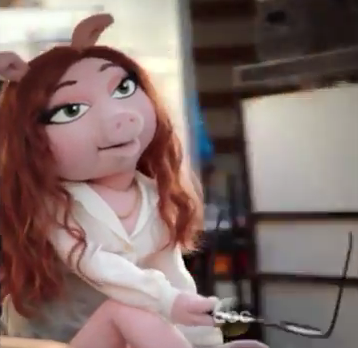 In her short video appearance, she’s holding a pair of glasses.  And as everyone knows, the only time a Muppet should have glasses is if they have no eyeballs or if their eyeballs are painted onto the lenses.  So naturally, she’s only holding them to look smarter.  Therefore, she’s not very smart!  Ergo, what’s this dummy doing hanging around our frog?  Ipso facto!  Latin!!! 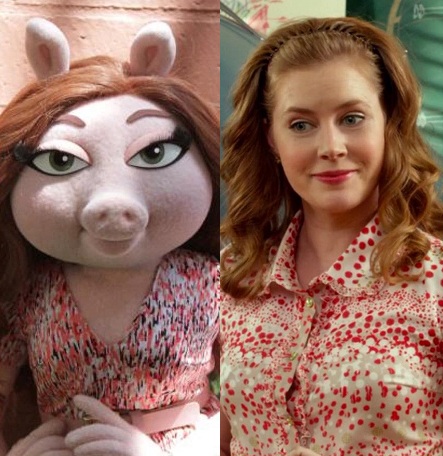 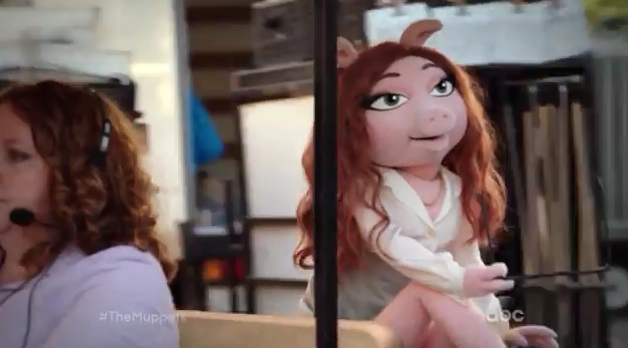 Hitchin’ a Ride on the Golf Cart

What, are your legs broken??

Where did she come from??  She wasn’t here a few minutes ago!  We are correct in hating everything until they prove themselves worthy of our love and attention!

The Fictional Relationship Between Two Characters With a History of Instability Continues On Its Natural Path as a New Variable Is Introduced That Furthers the Storyline, Creates Viral Interest, and Successfully Promotes Their Impending Television Show While We Wait For the Status Quo to Inevitably Return

Seriously everyone, cool out.  It’s going to be fine.  Hold out a little hope until we’ve seen a couple episodes of the new show.  And then you can complain!

Click here to tweeze your t-zone on the ToughPigs forum!