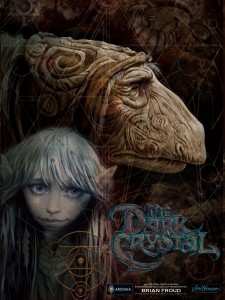 I have never played a role playing game in my entire life.  But if I were to play an RPG, it’d probably be something Henson-related.  But until now, my dreams of role playing as a Gelfling were unfounded, as Archaia Entertainment is releasing the very first Dark Crystal RPG in late 2012.

Archaia recently found some success in RPGs based on titles like David Petersen‘s Mouse Guard, and they’ll be creating a similarly all-ages game to go along with Dark Crystal.  The game will be available as a hardcover book, with the hopes of expanding the line somewhere down the road.

Stay tuned to ToughPigs for more information about the Dark Crystal RPG as the details arise!

Click here to roll a 20 on the ToughPigs forum!