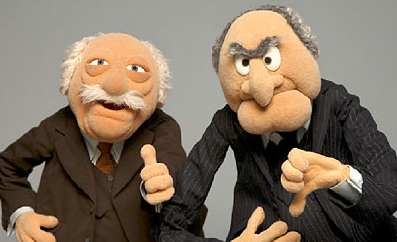 I have this friend.  He’s asked me not to use his real name on the internet, so I’ll just call him Mikey Pajamas.  Mikey Pajamas is a casual Muppet fan. He has a certain fondness for the characters, he enjoyed the movie The Muppets well enough, and he has an Animal keychain.  But he hasn’t decided yet if he should see Muppets Most Wanted in theaters or wait until it comes out on Blu-ray so he can watch it at home while eating Hot Pockets.

When I asked him what would persuade him one way or the other, he said he wanted to know what the critics thought. Because I’m a nice guy and a dutiful Muppet fan, I scoured all the reviews to see what people were saying about various aspects of the movie, so I could help Mikey Pajamas make his decision.  Here’s what I found.

The Balance of Human Actors to Muppets

What didn’t work [in The Muppets] were the human characters who pushed The Muppets into the background of the movie. Happily, Amy Adams and Jason Segel have been jettisoned and Kermit and company get the spotlight this time. –James Ward, The Californian

Though The Muppets was undeniably charming, it often felt as though Jason Segel and Amy Adams were slightly more important than those beloved characters they deified so much. Here, the humans support the Muppets, not the other way around. –Josh Spiegel, Sound on Sight

[T]he bigger problem with “Muppets Most Wanted” is a failure to find the right human-to-Muppet ratio and a screwball feel for how the species interact. –Associated Press

What really propels the film, however, are stellar performances from a pair of the film’s humans, Ty Burrell (Modern Family) and Tina Fey (Acceptance). –Zoe DiGiorgio, University of Maryland’s The Diamondback

…Tina Fey is funny and charming as hell, looks amazing, rocks an amusingly Boris-and-Natasha-esque accent, and shows off a surprisingly lovely singing voice in one of the picture’s best production numbers. –Jason Bailey, FlavorWire

Tina Fey… never quite rises above the Herculean task (for her) that a faux Russian accent requires. –Reel Roy Reviews

Gervais and Fey turn out to be the ideal human foils for that enterprise, playing along with game professionalism and never letting the audience see them wink (at least not too obviously). –Ann Hornaday, Washington Post

Gervais, on the other hand, seems to sleepwalk through his performance. Though he usually shines on-screen with dry wit and acute timing, he feels a bit out of place in all his scenes. -Zoe DiGiorgio, University of Maryland’s The Diamondback

The Cameos: Do They Enhance the Movie?

The film is peppered with literally dozens of amusing celebrity cameos… –Witney Seibold, The Nerdist

Celebrity cameos are essential to a Muppet movie, but here they are dispensed without wit, as if they were interfering with the lame caper. –Joe Williams, St. Louis Post-Dispatch

[O]ften enough, the randomness of the cameo works in the film’s favor; none of them really falter. –Josh Spiegel, Sound on Sight

However, the biggest shame of the whole enterprise is that it feels as if these celebrity cameos overshadow the real stars of the film: the Muppets themselves. –Zoe DiGiorgio, University of Maryland’s The Diamondback

…song and dance numbers that get your feet tapping and poke fun at current events. Numbers, I feel, that are better than the previous Muppets film. –Nick, French Toast Sunday

The best Muppet movies have been so closely associated with their music over the years and no one is going to be humming a single bar of a “Muppets Most Wanted” track on the way to the parking garage. –Brian Tallerico, RogerEbert.com

As usual, the songs (written by Flight of the Conchords’ Bret McKenzie) are so catchy you’ll be humming them for days. -Chris Nashawaty, Entertainment Weekly

Even the songs, again composed by “Flight of the Conchords” vet Bret McKenzie, have the tone of afterthought; B-sides to ideas explored in the previous film. –Brian Tallerico, RogerEbert.com

The pure comedy of the film helps to keep things moving: Stoller has trouble mustering the Apatovian emotion without his Muppets collaborator Jason Segel, but his script is still jammed with clever wordplay and witty shots at the fourth wall. –Erik Adams, The AV Club

The good news is that while the picture has little in mind save making us laugh, it does a superb job doing just that. –Scott Mendelson, Forbes

[T]he wittiest jokes and cameo appearances are designed to soar far over the heads of young filmgoers and into the atavistic pop consciousness of their adult companions. –Ann Hornaday, Washington Post

Walter: Is He Likeable?

…”The Muppets” gave us multiple characters to follow, including not just the introduction of the charming Walter… –Brian Tallerico, RogerEbert.com

The way they handled Walter in the film is also kind of perfect. –Zac, HavingSaidThat…

Also, why didn’t they kill off Walter, the useless new Muppet introduced in The Muppets? He’s a character without a defining trait, and when he shares scenes with Fozzie and Animal it’s like he fades out of existence before your very eyes. –Devin Faraci, Badass Digest

Is There One Clear, Valuable Lesson to Be Learned?

Because this is a children’s movie, we do get a lesson spelled out for us at the end, but it’s an important one: Don’t forget to tell the good people in your life that you appreciate them. –Jack Silbert, Media Darlings

At the core of Muppets Most Wanted, there’s a potent lesson about the nature of love: The things we think we want aren’t always the things that will truly make us happy. –Stephanie Zacharek, The Village Voice

But Seriously, Is There Enough of the Muppets in This Muppet Movie?

As a matter of fact it seemed like there was a bit too much focus on the plot and not enough on the individual Muppets. –Christopher Beaumont, Critical Outcast

But what Muppets Most Wanted gets right most of all is making the Muppets themselves the main focus of the story. –Josh Spiegel, Sound on Sight

Will It Appeal to Viewers of All Ages?

I said that this movie was not for the unconverted, and I will also say that it’s not exactly for adults either. I mean, it has a fair amount of jokes that pertain to adult interests and they can easily watch it and be entertained, but I feel like this attempt was more for the kids who just like to see fuzzy creatures jump around.  –Jacob Miller, Movie Rehab

Muppets Most Wanted may be their most adult film yet, full of wink-and-nod humor and vintage references. –David Hiltbrand, Philadelphia Inquirer

But Is It Better or Worse Than The Muppets?

Muppets Most Wanted is a slight improvement over its predecessor, 2011’s The Muppets… –Roy Sexton, Reel Roy Reviews

I enjoyed The Muppets, but as a fan of The Muppet Show, and all of the fast paced silliness involved in that show week to week, Muppets Most Wanted felt much more my speed. –Zac, HavingSaidThat…

But after the delicious treat of 2011’s The Muppets, with Jason Segel and Amy Adams joining Kermit, Miss Piggy and the gang, Muppets Most Wanted feels like tasteless leftovers. –Peter Travers, Rolling Stone

On the patented Acme™ Silliness Scale, which peaks at 11.5, The Muppets was about an 8. But the new Muppets Most Wanted… registers closer to a 9.5. In other words, it’s better. –Stephanie Zacharek, The Village Voice

That being said, this movie feels like a bit of a let down from the 2011 revival.  –David Rookhuyzen, South Dakota’s Capital Journal

What they alight upon for this sequel, thankfully, is as winning, delightful, exuberant, and knowing as The Muppets, a equally fine return to form. –Josh Spiegel, Sound on Sight

However, the creative team behind this follow-up have misplaced and mis-prioritized so much of what worked about “The Muppets” that it’s hard to believe sometimes that it’s not an entirely different crew. –Brian Tallerico, RogerEbert.com

Don’t Pay Attention to Anything This Critic Says

Jason Segel’s script was much simpler, and his is probably the best of the eight Muppets films. –Conrad Foreman, The Michigan Daily

Sum Up the Movie in One Sentence

A strange sense of doom hangs over the rebooted Muppets, and it’s not from the Swedish Chef’s cooking. –Associated Press

Muppets Most Wanted is above all an incredibly entertaining comic adventure.  -Scott Mendelson, Forbes

Muppets Most Wanted brings the crew back for another adventure and the results are fun, fast paced and hilarious. –Zac, HavingSaidThat…

As the song puts it, it’s the Muppets again, this time in a just-pretty-good Muppet caper, but that isn’t such a bad thing. –Keith Phipps, The Dissolve

Because when Celine Dion is singing a duet with Miss Piggy while Kermit is escaping from Tina Fey at a Russian gulag to stop Piggy’s wedding to an evil German doppelganger, cinema is really just at its best. –Kevin Fallon, The Daily Beast

That’s Still Too Many Words.  Just Read Me the Headlines!

‘Muppets Most Wanted’ is a mediocre caper –St. Louis Post-Dispatch

Muppets Most Wanted is a Great Caper –The Village Voice

So there you have it! According to the critics, Muppets Most Wanted is better than The Muppets and not as good as The Muppets, it has too many humans and not enough humans, the songs are brilliant and the songs are boring, Walter is likeable and should die, there are plenty of funny jokes for all ages and there are no good jokes at all, and the cameos are lots of fun and terrible.

I related all this to Mikey Pajamas, and he said it wasn’t very helpful.  But he ended up buying a ticket to the movie anyway because he heard Bobby Benson’s babies are in it.  He loves those guys.

P.S. Almost every critic who gave the movie a negative review wrote something to the effect of, “In the opening number, the Muppets warn us that ‘the sequel’s never quite as good,’ and then they spend the rest of the movie proving it!” All of these critics are so clever and original, it’s obvious that they should write the next Muppet movie. 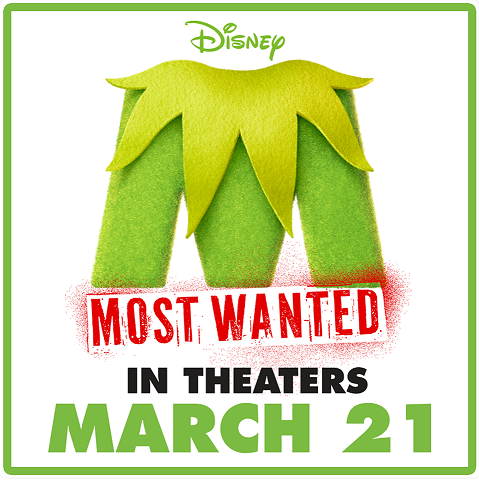