m ashamed to admit that I’m one of those Henson fans who doesn’t think much about the building process when it comes to puppets, Muppets, and creatures of all sorts. I can fully respect the designers and creators, but when I’m watching a performance I tend to be more focused on the performer and their abilities. It’s a gray area in my knowledge of all things Henson that I’ve been meaning to remedy for years now. I’ve never felt too bad in the past, seeing how it seems like everyone’s more quick to name a performer rather than a creative team member, which is kind of awful when you think about it. The designers are just as important in the creation of a puppet, if not more so, than the performers.

(Warning: spoilers ahead! If you’ve been putting Creature Shop Challenge off to watch on a rainy day and have no desire to know who won yet, you probably do not want to continue reading!)

In most ways, Jim Henson’s Creature Shop Challenge is just a normal reality show.  In this case, ten contestants are competing over a span of eight episodes to be a contracted employee at Jim Henson’s Creature Workshop, as well as winning $100,000. Not bad! These contestants are made up of four girls and six guys, all of which are skilled when it comes to crafting creatures. 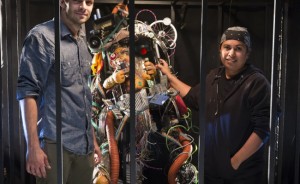 The episodes follow a rough routine format, as most reality shows do. At the beginning of each episode, the host (Farscape‘s Gigi Edgley) appears and presents the week’s challenge to the contestants. They are then given two to three days to complete said challenge, either in pairs or solo. The first half of the episodes are dedicated to watching the contestants through their builds, allowing us to see the obstacles and problems they have to tackle. During the second half of the episodes, the finished creatures are presented to the judges (Kirk Thatcher, Beth Hathaway, and Brian Henson). The contestants get the chance to speak on behalf of their pieces, as well as receive a small amount of feedback from the panel, before all of them are sent away and the judges can converse more in depth about the creatures they’ve just seen. The contestants are then brought back, wherein the strongest designer of the week is commended and the weakest is sent home.

This is basically how every episode goes. It does feel a bit routine-ish at times, with certain lines repeated in each episode by Brian or Gigi, but for the most part that’s all right. The routine feeling gives the show structure, so the viewers come to know what to expect. 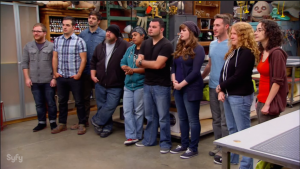 We also come to know the contestants quite well; quickly growing to love and/or tolerate certain designers over the show’s run. Melissa became a fast fan favorite, whereas Tina and Russ were a touch more difficult to like at times. I suppose we didn’t really get to know Chaz and Josh all that well; Chaz being sent home in week one, and Josh – despite winning the first week’s competition – being the only contestant who decided to leave on his own accord due to family matters. I don’t know about everyone else, but Jake was always my personal favorite. That dude seemed truly happy to be on the show 105% of the time, and there’s something so endearing about gratefulness.

Each episode build is particularly entertaining. We see the contestants create creative creatures that you’d find in a science fiction film or children’s story every week. Each build challenges certain skill sets, making it either easy for some or far out of others’ comfort zones. Most contestants end up rushing to get their creatures completed, and in one circumstance Ivonne didn’t even finish her mounted creature head, which got her disqualified. However, while putting the contestants out of their comfort zones when it comes to their skill sets might seem unfair, it did push them to learn new techniques and improve as artists, which ultimately should be the point of the contest, right?

Needless to say, despite how you felt about designers when it came to their personalities or if they played well with others, you have to admit that all ten of them are incredibly skilled individuals, in either their particular skill set or just in general. It’s easy to see how each and every one of them got a spot on the show. On more than one occasion when someone was sent home for a simple mistake they made on a build, I would shake my laptop and bellow, “BUT THEY’RE SO GOOD.” But I guess someone’s gotta go home every week, or else the purpose of the show is defeated. 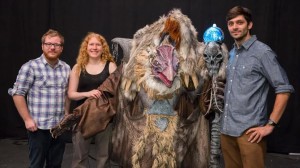 As I said, Creature Shop Challenge really isn’t all that different from any other reality show. We see contestants competing for an end goal, their work is critiqued by a panel of judges, and every week someone goes home. Like other reality shows, it’s interesting to see the dynamics between team members, such as the adorable friendship of Robert and Melissa or the childish drama with Tina and Russ. Not to mention it’s fascinating to see people with such amazing skill sets. We’ve grown used to shows where people whip up amazing wardrobes or beautiful meals, but to see people bringing foam and fur to life in such a short amount of time? Even the weakest pieces in each challenge are astounding and beautiful. The contestants are all incredibly skilled, some more so in certain areas. Jake’s ability to mold clay quickly is jaw dropping, as is Lex’s talent at fur fabrication and Ben’s knowledge of mechanisms. Win or lose, it’s hard to argue that all ten contestants weren’t phenomenally talented.

What really sets the show apart for me personally, though, are the people. Usually on reality shows, producers attempt to play up the drama by throwing in catty fights and unnecessary drama amongst contestants, and sometimes even judges as well. With the exception of Tina and Russ’s short-lived tiff, as well as Ben and Melissa’s one episode of frustrating lack of communication, there is almost no drama to be seen. It appears that all the contestants not only admire one another’s work, but get along with each other quite well. We see consistently how they’ll hand out tips to their competition, as well as dole out compliments left and right. While they’re all there to win, it’s nice to see that the ten contestants can admire the brilliant work all around them.

Then there’s the judges. First off, can I please have Kirk Thatcher’s hat collection? 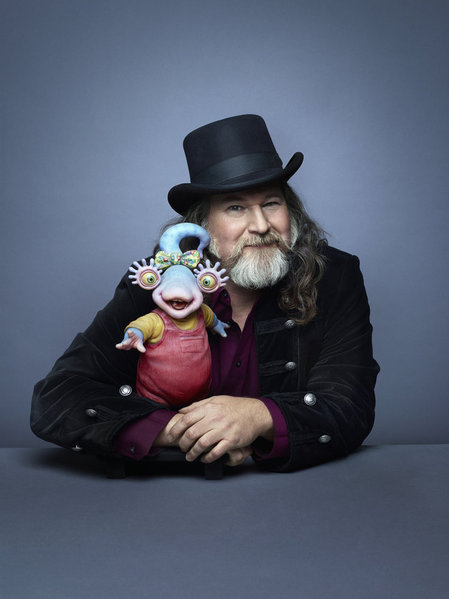 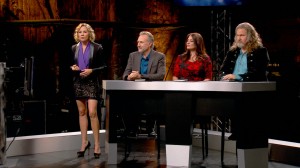 When it comes to judges on other reality shows, there tends to be a balance. There’s usually the really sweet one who tries to hand out the positives, the one who tries to be funny and cool, and the hard ass who has no problem tearing the contestants apart. This is not the case with Creature Shop Challenge. All of the judges are fair in their critiques, pointing out the things they like and don’t like. They’re neither rash nor cruel. I suppose the toughest to please judge is Brian, as he’s not afraid to go a little bit more in depth about the things that he doesn’t like about a creature, but he’s in no way harsh about his criticism. He speaks matter-of-factly, and usually throws in something he likes about the creature as well. As a whole, the judges are quite positive. As Tough Pigs’ co-runner, Ryan Roe, commented, “It’s a kinder, gentler reality show.”

Creature Shop Challenge also allows us to ponder the prominence of CGI in films in the last decade. It’s no surprise that filmmakers are relying more heavily on CGI nowadays, which isn’t necessarily a bad thing but it could stand to be argued that films and television lose a bit of their charm when computers take over. That’s always been the great thing about Muppet, Sesame, and Henson productions; CGI has always been a second runner in comparison to fabricated creatures. While CG characters are more easily manipulated, there’s just something so wonderful about a character operated through puppetry and animatronics. The level of skill that went into building each of the creatures on Creature Shop Challenge emphasizes the amount of hard work that would go into any build for film or television. If anything, this show is like a banner being waved high in support of handmade puppets; they’re beautiful, they’re detailed, and they’re not a dying art. 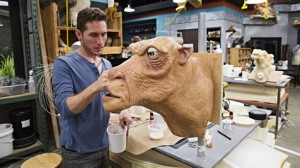 In the last episode, we were left with three finalists: Ben, Melissa, and Robert. Six of the eliminated contestants were brought back in the finale, two of each being assigned to help the finalists (Josh did not return, I assume because of his abrupt departure). Chaz and Lex helped Melissa build Abernash, Tina and Jake assisted Ben on Solee, and Robert had Ivonne and Russ aid him with Vlorkof. The prompt was that the contestants had to build three strangers who met in a tavern, each swapping one cursed item for another. The creatures had to enter as full bodied characters, then transitioned into characters that could be puppeteered from under the tavern’s table. I think everyone would agree that the work seen in this final challenge is, by far, the best from the entire show’s run. All the contestants created three solid, amazing looking creatures, and I did not envy the judges for having to choose a winner.

Our winner in the first season of Creature Shop Challenge, to many’s surprise, was Robert. His win is somewhat strange because, out of the three finalists, no one really expected him to win. This is not to say that Robert’s not an incredibly skilled and talented individual. On the contrary, I was blown away with a lot of his work on the show – especially his lily pad creature during the swamp monster challenge – and was constantly surprised that he slid under the judges’ high praise almost every week. Plus in his final creation, Vlorkof, Robert really nailed a great sneering/sneezing effect, which was most impressive.

That being said, Robert was in no way slotted to win the competition. Most people had their money on Ben or Melissa. Ben was, arguably, one of the most – if not the most – talented people on the show. He won competition after competition, and almost always managed to blow the judges away. His main problem was that his way was always the right way, in his eyes, which almost got him eliminated in the swamp monster challenge when his rock creature didn’t fit the “hiding in plain sight” guidelines. Then there’s darling Melissa, who undoubtedly grew the most in her skill set throughout the show’s run. She was the fan favorite right from the get go, with a bubbly personality and an undeniable passion for her craft. While people assumed Ben would win, Melissa was the one everyone was rooting for – myself included. 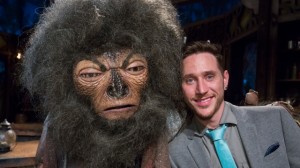 The interesting thing about the finale is that it didn’t seem to take into account the contestants’ previous work on the show; it simply took their final creations into account and judged which one was the best. There were also such little things that, if they had been fixed, could’ve changed the entire outcome. What if Melissa had put more effort in her final creature’s mouth? Would Ben have won if he had done a different paint job? Would Robert have lost if he hadn’t had Russ and Ivonne on his team? It’s just strange that they didn’t consider all previous projects, because if they had Robert probably wouldn’t have won.

All together, it was a terrific show that made for great entertainment, and the fact that there’s already talk of a second season is pleasing. I can’t wait to see all the talented builders and innovative creatures the future has in store for us!