The Pig is On the Couch

One of the greatest things about being a Muppet fan is that there is always new stuff to discover. For example, the Muppets love showing up on talk shows, and every so often, the ones recorded on some fan’s VCR back in the ’90s will find its way to the YouTube of the future!

ToughPigs’ own Carolyn Wiesner is one of those collectors, and she was generous enough to upload some of those rare interviews to share with the rest of us. Thanks Carolyn! And thanks to Carolyn’s VCR! So without further ado, let’s take a peek at the Muppets doing what they do best: Talking to celebrities.

Miss Piggy and Kermit the Frog made an appearance on “The Tony Danza Show” to try and collect some money for the Who’s the Boss movie. I would’ve given a buck for that!

Clifford showed up on Sinbad’s talk show, “Vibe”, and got to sit in with the band. And Sinbad shows off his dance moves.

Kermit hopped over to BBC’s “The Island” (Get it? Like, he hopped like a frog??? Maybe I should dumb down the jokes…) and confirmed the non-confirmation about him and Miss Piggy. Again.

Miss Piggy appeared on “The View”. Can you guess which one is the lady pig?

Bear shows off his dance moves on “The Donnie and Marie Show”. And I dare you to watch this and think of Bear as “just a puppet”. That ursine is real! And Donnie and Marie are inches away from getting their arms bitten off!

My favorite of the bunch is Miss Piggy on the UK’s “This Morning”, which is another fantastic example of Frank Oz being given free reign to do whatever the heck he wants on live television. The second segment in particular (when Piggy is messing with the cook) is brilliant. Like, “Cookie Monster annoying Martha Stewart” brilliant.

Thanks again to Carolyn for uploading these great videos! And thanks to the internet, for letting us live in the future!! 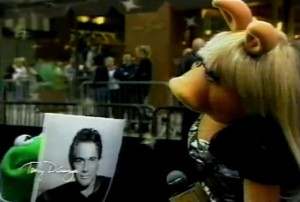 Click here to Cha-Cha-Cha with Bear on the ToughPigs forum!

Frogs, Elves, and Someone Named Donna: Muppets on YouTube

Behind the Scenes and Extra Verses: Muppets on YouTube