Cookie Monster Said His “Real Name” Is Sid, But Don’t Get Too Worked Up About It

Here’s what happened: The official Sesame Street TikTok account posted a clip of a song from the show called “The First Time Me Eat Cookie.” It went a little something like this:

Is that cute or what? There’s adorable baby Cookie Monster with his little bonnet — and there he is, trying a cookie for the first time ever!

Oh, but wait. In the clip, he said something about how when he was that age, he thinks his name was “Sid!” That’s the part that grabbed most people’s attention. Comments on the original TikTok included the following:

So yeah, that’s a lot of ALL CAPS, and isn’t it a lot of question marks???? The “revelation” of Cookie Monster apparently disclosing that he was born with a name other than “Cookie Monster” took a lot of TikTok viewers by surprise.

But does this really count as a revelation? The song “The First Time Me Eat Cookie” first aired on Sesame Street in 2004 — that’s 18 years ago! The information has been out there for almost two decades! As Muppet Wiki points out, the song was released on a 2016 DVD called Monster Magic, and it’s been on Sesame‘s official YouTube channel since 2016 as well.

Well, that seems pretty definitive. In the song, he seemed uncertain… “In fact, back then, me think me name was… Sid,” he says, tossing it off as an afterthought before getting to the more important, cookie-based portion of his story. But the tweet reads like he’s verifying the veracity of a rumor. It’s like he’s trying to get ahead of the story so he can control the narrative, much like Richard Nixon’s famous “Checkers” speech.

This wasn’t the first time Cookie Monster had addressed his “real name” on Twitter, but he had previously been less sure about it. In 2010, he had this to say on the Sesame Street account:

It’s quite interesting that something seems to have happened recently to increase Cookie Monster’s confidence on the topic of his original name. Before that, he seemed to have some gaps in his memory, kind of like the gaps in Richard Nixon’s White House tapes. I’m sorry, I should really stop comparing to Cookie Monster to Richard Nixon. I won’t do it again, I promise.

Anyway, after the recent tweet, the content-aggregating websites picked up the story. Here’s a website called Junkee with a story called “If Cookie Monster’s Real Name Isn’t Actually Cookie Monster Then Who On Earth Am I?” CBR.com went with the headline “Sesame Street Fans Are Shocked by Cookie Monster Sharing His Real Name.”

The website for a radio station called SmoothFM called their article “Sesame Street Has Revealed The Cookie Monster’s ‘Real Name’ And We’re In Disbelief.” And a website called PedestrianTV, which has more ads than a Chips Ahoy has chocolate chips, went with the dramatic (but clever!) “TikTok Rediscovered Cookie Monster’s Actual First Name & Folks Are Crumbling At The Revelation.”

As members of the modern media audience, we watch a lot of TV series and movies that are pretty continuity-heavy. TV dramas — and even comedies! — are more serialized than ever, and huge film franchises make us feel rewarded for remembering what happened three movies ago. And of course, this is a long-established element of books and comics, and it even happens in commercials sometimes. I know I, for one, can’t wait to see how things turn out for Jon Hamm and Flo from Progressive.

As media has shifted to this kind of storytelling, we’ve been trained to latch onto anything that sounds like it’s an important nugget of information, and file it away in the wikis of our brains. I think that’s why people are reacting so strongly to learning that Cookie Monster thinks his name was Sid. For their entire lives, these folks have known the name of the monster from Sesame Street who eats cookies, but with the way we’re now programmed to consumed stories, having that knowledge contradicted feels like a major plot twist. It’s like finding out that the cookie you thought was chocolate chip is actually oatmeal raisin.

But as I rewatched “The First Time Me Eat Cookie,” it seemed to me that it was more likely that the line about “Sid” was included in the song because it sounded funny than for any deeper reasons. I wanted to see if my suspicions were correct, so I went straight to the source.

No, sorry, I didn’t talk to Cookie Monster. But I did reach out to longtime Sesame Street writer Christine Ferraro, who’s written some of the funniest Sesame material of the last several years. She wrote the lyrics to “The First Time Me Eat Cookie!” Here’s what she said:

The line was written as a gag, because it rhymed with “kid”. Obviously, he wouldn’t be called Cookie Monster before he discovered his love of cookies, so he must have had a name, right?

Not meant to be canon at all.

So there’s that. If you’ve been lying awake at night since seeing that TikTok, I hope you can now rest your googly eyes and sleep peacefully.

Besides, Sesame Street has never been very concerned with continuity, and it would be silly if they tried. Consider the fact that Miles and Gabi were born several years apart but somehow graduated high school on the same day. Or the fact that multiple numbers have been given for the Count’s age. Or that one episode where Bob, Luis, and Gordon reminisce about being in a band in the ’70s and there’s a flashback, and they look nothing they actually did in the ’70s when they were all characters on the show.

Oh, and guess what? The song from 2004 wasn’t even the first time in Sesame Street history that the Muppet we know as Cookie Monster has been identified by a name other than “Cookie Monster.” Check out this clip from the first season of the show, in which the shaggy blue guy uses Ernie’s phone to call his mom:

His real name is “Tiny!” And how about this other one from the first season, where the shaggy blue guy and another blue guy address each other by name:

His real name is “Harry!” I especially love this one, because it sounds very much like Jim Henson and Frank Oz are just goofing around at the beginning of the sketch.

I guess my point here is that any established piece of information about a Sesame Street character is subject to change, especially for comedy purposes. “Sid” is a funny joke and an answer to a fun Muppet trivia question, but we shouldn’t treat it as if it’s engraved in stone. In another 18 years, maybe Cookie Monster will sing a song where he says he just remembered his name was actually Herman. But for now, the important thing is that the character is called Cookie Monster, and he’s told us that’s what he prefers to be called.

Oh, and one more thing: Yes, I know that the early version of the Cookie Monster puppet was called “Arnold” in those old Munchos commercials from the ’60s. I just haven’t seen any footage where he’s addressed as “Arnold” onscreen.

Oh, and one other one more thing: One time Sesame Street did a joke about Guy Smiley’s real name being “Bernie Liederkranz.” What are the odds that that’ll be the next big shocking TikTok discovery?

Thanks to Tony Whitaker and Michael Wermuth for alerting me to the “Harry” clip!

Click here to congratulate me for not comparing Cookie Monster to Richard Nixon again on the Tough Pigs forum! 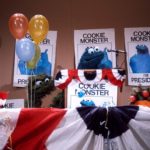