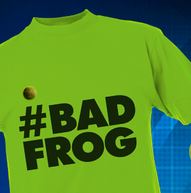 You might think that being an internationally-wanted master criminal would leave little free time for pursuits such as creating a vanity website. But you would be wrong, because Constantine, the frog we’ve already grown to love hating, now has his own corner of the world wide web at BadFrog.me. (BadFrog.com was already taken.  Don’t go there.)

The site includes some Constantine videos, as well as a trailer for Muppets Most Wanted. I guess even the villain wants us to see the movie. There’s also a collection of “#badfrog” Instagram selfies, and encourages you to submit your own, if you’re into that kind of thing.  The BadFrog Store lists several items (with prices in British pounds) as “Coming Soon,” and I really hope they actually sell them eventually, because I’d love to own an official replica of Constantine’s mole.

There’s also some other stuff, but you should just go to the website instead of wasting time reading my descriptions of it.

Click here to pose with your pinkie on your upper lip on the Tough Pigs forum!