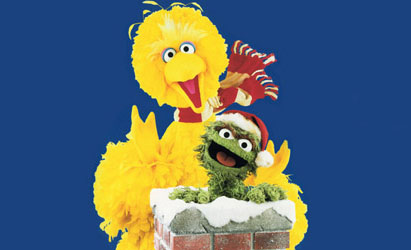 Caroll Spinney is synonymous with Christmas.  Not only is his birthday the day after Christmas, and not only is it his namesake (his mother named him Caroll because he was her “Christmas Carol”), but his two most famous characters are widely known for their many holiday appearances.  With a slew of Sesame Street Christmas specials out in the world, Big Bird and Oscar often take center stage, making Caroll on par with Santa Claus.

In honor of both Caroll Spinney and the holiday season, let’s take a look at most of the times the two have been the holly to each other’s ivy!

The very first Christmas Caroll/Christmas collaboration is one you likely haven’t heard of.  And if you have, it’s likely you didn’t even understand what they were saying.  In 1975, Austrian entertainer Peter Alexander filmed a holiday episode of his German variety show on the set of Sesame Street, and all of the Muppet performers handled their own characters to be over-dubbed by German voice actors.  The special includes a number where Alexander dances in the snow with Big Bird and trades barbs with Oscar.  At least, that’s what I assume happens, because I have no idea what they’re talking about in this thing.

The most famous Sesame Street holiday special, Big Bird takes center stage as he questions how big, fat Santa Claus gets down all those skinny chimneys, leading to a frigid night on the roof.  Meanwhile, Oscar was the one responsible for setting Big Bird’s crisis of conscience in motion.  Caroll does an uncanny job playing the moral opposites of the special, portraying both Big Bird’s hope and Oscar’s despair with his own brand of holiday magic.

Perhaps one of the worst Sesame Street specials ever filmed (in a “so bad it’s good” sort of way), Caroll is featured as only one of two puppeteers.  Oscar stars as a miserly coot who needs to learn the true meaning of Christmas, sort of like a poorly-written Ebeneezer Scrooge.  And then he’s given a book about ghosts from Michael Jackson, sings “Yakety Yak”, and adopts a kitten.  You know, like a traditional Christmas.

There’s a moment in the perfect holiday special A Muppet Family Christmas when Kermit the Frog hears carolers, and opens the door to find the Sesame Street gang approaching the farmhouse.  But it’s not the sight of the Bert and Grover and Prairie Dawn that tugs at the heartstrings, it’s Big Bird’s entrance, wishing everyone a Merry Christmas and looking larger than life.  There are few moments in television history that truly represent the welcoming of the holiday like Big Bird’s entrance in this special.

That’s not even mentioning the sub-plot in which The Swedish Chef tries to cook Big Bird and feed him to the Muppets for Christmas dinner, which is more than just comedy gold – it’s a rare combination of two favorite Muppet characters who would never otherwise be seen together.  Similarly, Oscar and Rizzo share a scene and become roommates for a night, although the presence of a rat in Oscar’s trash can is slightly less surprising.

What a perfect special.

This special, which aired in 1996, is the first in the Elmo era.  Big Bird and Oscar have officially taken a step back to make room for the ticklish menace, and Elmo certainly shows his dichotic energy by ruining Christmas (with a wish that it be Christmas every day), only to then save it again.  We also see Big Bird and Oscar’s roles flipped, as Big Bird spends the special lamenting the departure of Mr. Snuffleupagus – who has gone to visit relatives in Cincinnati – while Oscar basks in the joy of the “bah humbug” season. 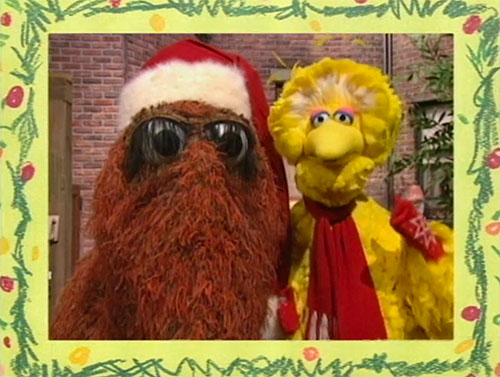 In a holiday special that’s just one big “Elmo’s World”, there’s not much room for Big Bird and Oscar, let alone anyone else.  There’s only room for Elmo in Elmo’s World, and maybe a Mr. Noodle or two.  Oscar appears briefly to show off a smelly sneaker he got as a Christmas gift, and Big Bird makes two very short appearances.  First in a video message with Mr. Snuffleupagus (wishing Elmo a holiday full of fun, food, family, and more food), and then to stand in the background of a group setting singing “Jingle Bells”.  Not Caroll’s finest holiday, but we’re not done yet! 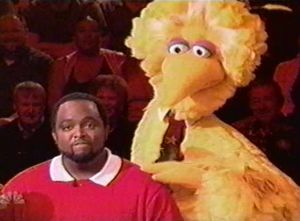 Deal or No Deal

In 2006, Big Bird appeared on a special two-hour episode of Deal or No Deal that aired on Christmas Day.  Although the episode was certainly holiday-themed, there wasn’t much of a holiday connection to his scene.  Instead, Big Bird confronted a contestant who claimed to have a Big Bird phobia, and quickly put him at ease.  Santa Claus also appeared in the episode, but the big guy is nothing compared to the big bird!

Elmo’s Christmas Countdown seems like it should be a classic on paper, but it’s a bit of an uneven mess.  Oscar the Grouch once again sets events in motion with his usual grumpiness (even reprising his Christmas Eve on Sesame Street song “I Hate Christmas”) by breaking the Christmas-Counter-Downer device and giving Elmo an opportunity to save Christmas once again by collecting performances by his friends.  The whole thing ends up being a de facto variety show, with some terrific numbers and a few duds.  Big Bird teams up with Anne Hathaway for one of the good ones, singing “I Want a Snuffleupagus for Christmas”.

It’s amazing to see how many times Oscar serves as the inciter to kick off stories about finding the true meaning of Christmas.  Once again, he’s the Scrooge who needs to be taught a lesson by a few ghosts who – rather than showing Oscar his own past, present, and future – play clips of Sesame Street‘s holiday celebrations throughout the years.  In a surprising move, Big Bird only shows up among the clip compilations, and we all know it’s not Christmas without Big Bird.

In 2011, Michael Bublé invited Oscar the Grouch to his annual Christmas special to complain in between every line while Bublé sings “Have Yourself a Merry Little Christmas”.  We’re denied an actual song from Oscar, which I guess means we were on the naughty list that year and Santa ran out of coal.

Once Upon a Sesame Street Christmas

Caroll Spinney’s final Christmas production was just a couple years ago in 2017.  Once Upon a Sesame Street Christmas goes into Sesame Street’s past, and we see origin stories of many of the Muppets’ ancestors.  Caroll was no longer physically performing his characters by this point, but his voice can still be heard in Big Bird’s great-great-great grandfather (who was flying south for the winter and decided to stop and roost on Sesame Street) and Oscar’s great-great-great grandfather (who has long hair and glasses).  It’s wonderful that in Sesame Street‘s most recent Christmas special, they still found a way to include the most important representative of the holiday: Not Santa Claus, but Caroll Spinney.

Happy holidays, Muppet fans.  And be sure to raise a glass of eggnog to Caroll Spinney when you see his wonderful performances on your annual viewings of all these Sesame Street holiday productions!

Click here to keep Christmas with you all through the ToughPigs forum!