The following was written by Dave Hulteen.  Take it away, Dave!! 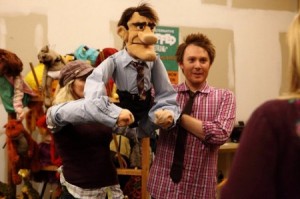 I’m not much of a reality television fan. I’m not snubbing my nose at it, I really just don’t like seeing people being genuinely mean to each other, so why on earth would I watch Celebrity Apprentice this past Sunday evening on April 15th? Well because it featured the Henson Alternative Puppetry improv group Stuffed And Unstrung, AND because five months earlier, I was at the taping of the improv segment in the studio audience, but I’ll get into that later. First a quick recap of the show and in particular, the Puppet-Up episode.

So lovable billionaire Donald Trump has a bunch of celebrities do different tasks and challenges in a business like manner so he can exploit the worst of them, then humiliate them by firing them as if they were nose-picking fifteen-year-olds caught sleeping at the fryer in Burger King. Caught up? Great. This week’s challenge had the remaining 8 celebrities design and build their own puppets and then perform them as well in improvisational comedy. Now the Donald knows to work with the best, so he brings in none other than the president of The Jim Henson Company. Brian Henson. 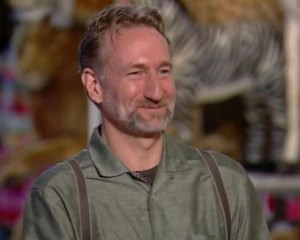 First of all, Mr. Trump told the gang he knew and respected Jim Henson, so instant props to the Donald. The strange thing was how he told them this and introduced Brian Henson to the group in FAO Schwartz and not once mentioned the Whatnot Workshop just 30 feet behind them. It became clear very quickly though that a lot of stuff just had to be edited for all the awkward silence and hateful stares and mutterings the group lambasted on each other, and we the viewers could not be spared a single moment of that. Anyway it probably didn’t matter too much because the group were brought to the New York Creature Shop to design and build their puppets. At least they said it was the Creature Shop. Aside from a few rolls of fabric on folding tables, it certainly didn’t look like the magical workshop I’ve seen on television specials before. So then we see people arguing, yelling, getting antsy, fake laughing, struggling with basic human behaviors like thinking and breathing, and generally following the standard reality TV formula that we’ve all grown to love and cherish.

The celebs formed two teams, but we’re not really going to go into any of that. Let’s talk about each celeb and what they contributed. Comedienne Lisa Lampanelli puppeteered a small orange rod puppet. I can tell you on a behind-the-scenes level that most of the laughs she got came from wildly screaming and being shocking. Don’t get me wrong, I’m no prude, but my perception was that the audience reacted mostly to her swearing and crude humor. I mean let’s be honest, it’s not every day you see a puppet drop one F-bomb after the other and talk about genital odor. I was there, NBC kept it tame compared to what was actually performed. Teresa Giudice from The Real Houswives had a yellow hand puppet. That’s about all she did. This is where the episode that aired did the actual performance justice. She said next to nothing at the performance and didn’t even move the puppet’s mouth. This was bad puppetry, poor acting, and a total lack of hand/eye coordination at it’s finest. Miss Universe 2008 Dayana Mendoza apparently constructed Lisa’s puppet and looked smoking’ hot. At the taping, she only came out at the very end, and she looked smoking’ hot there too. I’m not a judge, but if I were team captain, I would have just made her stand out front and look hot. She’s really good at it! Paul Teutul, Sr. from American Chopper stood there. Aubrey O’ Day played host for one segment. Now I didn’t know at the time of the taping who she was, but I will say she really was an amazing host. In fact, at the taping, she was so good, I actually thought she was the regular host for Stuffed and Unstrung (the magic of television: the group that was shown first on Celebrity Apprentice actually performed second at the taping, so Aubrey was the very first performer we saw). 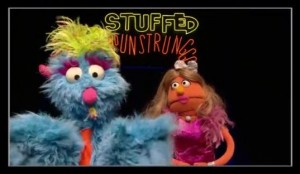 Penn Jillette played host and was accused of letting things go too long by Brian Henson as relayed to Donald Trump later in the board room. For what it’s worth, I think he would have made a fun puppeteer, but he backed out because he stands so incredibly tall over the others. However, whenever I hear or see Penn, I really just want to hear him say, “You’re watching Mystery Science Theater 3000 on Comedy Central!”.

Now I’ve saved Clay Aiken and Arsenio Hall for last. American Idol, er, “Pop Idol” Clay Aiken boasted some basic knowledge of puppetry from church as a young boy on the show, and you know what? I personally believe he was the best celebrity puppeteer there. Granted, that’s not saying a whole lot, but what you didn’t see was how versatile he was. He did great voice work and was pretty funny too. Clay also took a lot of pride in what he did and respected the art of puppetry. Arsenio was noted on the show as being the best puppeteer, and while I disagree with that, he at least seemed to grasp the idea of performing. Maybe I was expecting too much from such a successful comedian, but Arsenio didn’t bring the razor sharp wit I hoped he would. The real disappointing thing for me though was that there was no mention of Arsenio’s relationship to Jim and the Muppets. You see, in Muppet fandom, Arsenio Hall holds an iconic place amongst fans as his talk show was not only the first appearance of Clifford (performed by Kevin Clash), but also the final television appearance of Jim Henson himself. Now for all I know, Arsenio had mentioned or filmed some reflection on this and it just didn’t make the final cut, but as a die hard fan, that kind of hurt.

Now let’s travel back in time to early November last year when my friend Mike from Boston wrote me he was coming to New York and wanted to invite me as his guest along with his wife to a special taping of Stuffed and Unstrung. No one seemed to know why such an event was being held right up until Brian Henson himself told the audience seconds before filming began that “By now you probably are all aware that this is a taping for an upcoming episode of Celebrity Apprentice”.

Each Stuffed and Unstrung show was nearly 20 minutes long, and we all laughed hysterically, but it was not at the poorly improved comedy of the celebrities, it was at the super talented Henson Alternative puppeteers and their amazing performances! Victor Yerrid, James Goodwin, Colleen Smith, Tyler Bunch, Leslie Carrara-Rudolph, and Brian Clark. These puppeteers made the “celebrities” shine. They did major clean up work and were so sharp. Arsenio’s head popping into the shot was a constant reminder he didn’t do this very often, and the Henson puppeteers made a whole gag around it. I wish that the majority of the show could have been the actual performances as so much great stuff was cut.

On a personal note, on Thursday, November 10, 2011, the day all this was filmed, I got to take advantage of my situation. Between tapings, I struck up a conversation with a stage hand and asked him if he thought there’d be any chance of meeting Brian Henson. He was sitting just 3 rows right behind me. The stage hand saw no reason why I didn’t just go up and say “hello” now! I jumped up and almost immediately found myself standing next to Brian Henson.

“Mr. Henson?” I said. It sounded so surreal. “I’m a huge fan and just wanted to say hello.”

“Oh hi!” he smiled warmly. It was startling how much he looks like his father up close. “Thank you! What’s your name?”

Now I could go into a deeply personal little diatribe about this brief exchange, but I’ll simply leave it at me telling him my name and very quickly saying “Thank you” for all that he and his family has done.

So in the end, I enjoyed a fantastic puppet improv show that was rudely interrupted by a reality television show. Oh and Paul, Sr. got fired. 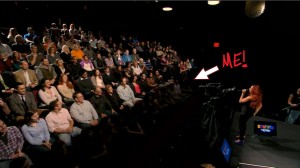 Click here to puppeteer The Donald’s toupee on the ToughPigs forum!