Cameron Garrity: Something That I’m Supposed to Be 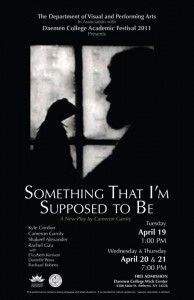 Recently, college student and Muppet fanatic Cameron Garrity did what few of us have dreamed of: He wrote, directed, produced, and starred in a play about the fictionalized life of Jim Henson. Not only that, but he built the puppets and taught his cast how to puppeteer. I think it’s safe to say that Jim would’ve been proud of Cameron’s Renaissance Man actions.

Unfortunately for us, Cameron’s show, “Something That I’m Supposed to Be”, has already ended its run. But Cam was nice enough to tell us his story, share some pictures from the show, and even provide video of the show itself.

Read on for the story of a great example of amateur theater and Muppet fanaticism at its finest!

ToughPigs: How did you become a Muppet fan? And besides writing and starring in “Something That I’m Supposed to Be”, what form does your fandom take today?

Cameron Garrity: Oh boy?¢‚Ç¨¬¶ I?¢‚Ç¨‚Ñ¢m 20 years old now, which means I?¢‚Ç¨‚Ñ¢ve been a fan for 20 years (plus 9 months, I suppose). My second word was ?¢‚Ç¨Àúdawdord?¢‚Ç¨‚Ñ¢ which was baby talk for Big Bird. These characters have never not been a part of my life. Like most kids my age, I watched Muppet Show VHS tapes and Sesame Street on TV. The difference, growing up, was that I never stopped watching.

Today, I?¢‚Ç¨‚Ñ¢m as much of a fan as anyone can ask for. I own all the movies, have read all the books, and constantly check in on ToughPigs and MuppetMindset. I?¢‚Ç¨‚Ñ¢m also a puppeteer and puppet builder (who can do a killer Kermit impression).

TP: Can you describe “Something I’m Supposed to Be”? What’s it all about? (And I mean that in a non-existential kind of way.)

CG: Something That I?¢‚Ç¨‚Ñ¢m Supposed to Be is a play about Jim Henson ?¢‚Ç¨‚Äú specifically the end of his life and how he dealt with Michael Eisner of The Walt Disney Company. The play is told as a fantasy/allegory ?¢‚Ç¨‚Äú so instead of Kermit being a puppet performed by Jim, he?¢‚Ç¨‚Ñ¢s a living character brought to life by Jim?¢‚Ç¨‚Ñ¢s magic. Everything happens on an island, called Quintus ?¢‚Ç¨‚Äú harkening back to Shakespeare?¢‚Ç¨‚Ñ¢s Tempest. Eisner & Mickey invade their home in the pursuit of stealing Jim?¢‚Ç¨‚Ñ¢s magic.

TP: What were the big steps in the creative process to put this show on? 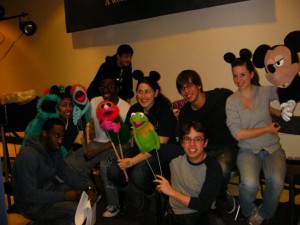 CG: The play was in development for about a year, from initial pitch to our final performance. Originally, I wanted to tell the real life story of Jim in a series of flashbacks held together with the speeches made at his memorial service. The play would scope from Sam and Friends through Jim?¢‚Ç¨‚Ñ¢s death ?¢‚Ç¨‚Äú examining the highs and lows of his career, particularly how he was ?¢‚Ç¨Àúpigeonholed?¢‚Ç¨‚Ñ¢ by his success on Sesame Street.

My college advisor on the project told me the concept would be lost on any non-Muppet fan and I needed to work on a more abstract level. He suggested I try to tell the story as a fairy tale ?¢‚Ç¨‚Äú primarily as an exercise to get the brain juices flowing.

Pretty quickly, though, I fell in love with the format and just ran with it; that was in October. The final draft was completed mid-March. Most of that time was spent developing the story ?¢‚Ç¨‚Äú making sure I wrote something true to Jim?¢‚Ç¨‚Ñ¢s history while creating a new story that everyone could appreciate.

Then it was onto rehearsals ?¢‚Ç¨‚Äú we had from the time I finished the script until April 19, the day of the show. It seems like a short amount of time, but five week?¢‚Ç¨‚Ñ¢s pretty standard for stage actors.

TP: The theme of your show is pretty deep. Did you have any worries that the less Muppet-savvy members of your audience would be lost?

CG: I knew that the historical references would be over their heads. It was the reason we scrapped my original story concept. But the show itself is about the importance of family, dealing with change, and continuing a legacy ?¢‚Ç¨‚Äú and those are things everyone can pick up on, regardless of their understanding of the Muppets. 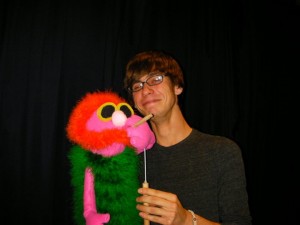 I will say that the show has a heightened meaning if you are a Muppet fan. A lot of scenes are references to Muppet Movies, especially The Muppet Movie. Those little subtleties enhance the overall story; I guess that?¢‚Ç¨‚Ñ¢s my reward to those fans who came to my show.

TP: Did you have any hesitations in writing for well-known characters like Kermit the Frog?

CG: Kermit was an interesting challenge. I was a bit apprehensive about the process, until I made a rule for myself: Write like Jerry Juhl. I really tried to write him as I would if I was writing THE Kermit… Give him that ‘Muppet Spirit.’ I thought of him as the same Kermit we’ve known all our lives. The difference is that ‘my’ version exists in a set of situations foreign to the Muppet canon.

TP: What sort of challenges did you come across in teaching your cast members how to puppeteer?

CG: Teaching puppetry is such a difficult thing. It took me 10 years do develop my skills, and I?¢‚Ç¨‚Ñ¢m still not there yet. I never had any teachers ?¢‚Ç¨‚Äú just what had been peppered throughout various interviews with Muppeteers. The best lesson I got was Steve Whitmire describing the ?¢‚Ç¨ÀúHenson Punch?¢‚Ç¨‚Ñ¢ in an A&E Biography of Sesame Street; making sure your hand does something different when your puppet whispers versus when your puppet shouts. You have to punctuate (or punch) your words.

I was the only member on the cast with puppetry experience. It was my responsibility as director to teach the other performers. All I could really do was share my experience with them, not having any sense of what formal instruction entailed. We spent a lot of time singing along to songs and having conversations with puppets on our hands.

All of the performers were really good sports throughout the whole process. Ultimately, our biggest enemy was time, and not having enough of it. But they persevered and performed wonderfully! 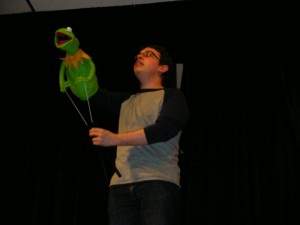 TP: How did you choose those specific characters to represent the whole of the Muppets in your show?

CG: Kermit and Ernie were givens. They so represent who Jim was ?¢‚Ç¨‚Äú their presence was essential. In the play Kermit is Jim?¢‚Ç¨‚Ñ¢s sidekick; together they?¢‚Ç¨‚Ñ¢re balanced out by Eisner and Mickey.

As for our ensemble, there were a few factors?¢‚Ç¨¬¶ I wanted characters to come from each of the ?¢‚Ç¨ÀúBig Three?¢‚Ç¨‚Ñ¢ segments of Muppetdom ?¢‚Ç¨‚Äú The Show, The Street, and The Rock. Then it was up to budget and my own abilities as a puppet builder. I would have loved to add Big Bird or Piggy to the cast ?¢‚Ç¨‚Äú but I just couldn?¢‚Ç¨‚Ñ¢t have pulled it off. We decided on Mahna Mahna, Cookie Monster, and Boober Fraggle. Overall, I think it was a good cross section of characters.

TP: Did you build the puppets yourself? Can you describe your puppet-building process?

CG: I built all of the Muppets myself. I had a lot of help from ProjectPuppet.com; almost everything was done using their patterns. They were all made with polar fleece and felt (with the exception of Cookie, who is fur); everything was hand sewn. The hardest thing was the design of Kermit?¢‚Ç¨‚Ñ¢s head ?¢‚Ç¨‚Äú which I had to do ?¢‚Ç¨Àúfrom scratch.?¢‚Ç¨‚Ñ¢ It took me four prototypes before I had a pattern that looked plausible.

Mickey was built by my friend, a very talented builder, named Adam Kreutinger. His work is absolutely beautiful, and I was so glad he offered his services to us!

TP: There’s an awfully evil-looking Mickey Mouse (with Michael Eisner in tow) in your show. What led you to having Disney as the antagonist? 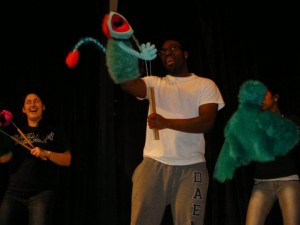 CG: Everything was based on history. I don?¢‚Ç¨‚Ñ¢t think it?¢‚Ç¨‚Ñ¢s a secret that the corporate infrastructure within Disney is a bit sticky ?¢‚Ç¨‚Äú no one in the audience seemed to have an issue with an evil Mickey.

In the context of the Muppets, however, I was influenced by Michael Davis?¢‚Ç¨‚Ñ¢ Street Gang. For those who haven?¢‚Ç¨‚Ñ¢t read the book, Jim looked to Disney to buy The Muppet franchise in early 1990. Eisner, CEO at the time, would only agree to the deal if Jim also threw in his half of Sesame ownership. Those close to him say the stress of negotiations was an incredible drain on Jim. He passed away in May of that year.

It is a harsh depiction, but one can argue that it is equally warranted.

TP: What’s next for “Something I’m Supposed to Be”? Are you taking the show to Broadway??

CG: Ha ha! Thank you for suggesting it?¢‚Ç¨‚Ñ¢s Broadway bound! I wish the show could be taken further than it was. This can?¢‚Ç¨‚Ñ¢t be the case, as the characters depicted in the show are not my own. We didn?¢‚Ç¨‚Ñ¢t even charge admission to any of our three performances. This was as a precaution from getting into any legal trouble.

As it is, the show holds a very dear place in my heart. I was never out to harm any of the franchises we represented ?¢‚Ç¨‚Äú just tell a compelling story. It was the first thing I ever really wrote before ?¢‚Ç¨‚Äú certainly the first thing I ever directed. At the very least, I?¢‚Ç¨‚Ñ¢ll have the experience to carry me forward.

TP: You recently got to visit the set of Sesame Street. What was that experience like for you? 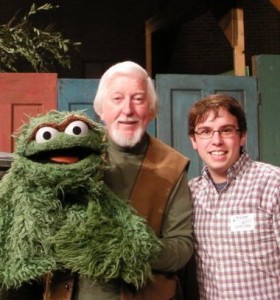 CG: My day on the Street was one of the best in my life! In preparing for the visit, I tried not to get my hopes up on who would be there, who I?¢‚Ç¨‚Ñ¢d meet. But I walked in the doors and all of my heroes were there! Pam Arciero, Kevin Clash, Marty Robinson, Caroll Spinney (!!!) ?¢‚Ç¨‚Äú among so many others. It was such a pleasure to meet everyone there ?¢‚Ç¨‚Äú I only hope that I?¢‚Ç¨‚Ñ¢m lucky enough to visit again!

TP: What’s in the future for Cameron Garrity? Will you be pursuing a career as a puppeteer? Or sticking with your writing? Or something else entirely??

CG: I?¢‚Ç¨‚Ñ¢m going to school for Graphic Design, with a minor in Theater?¢‚Ç¨¬¶ The plan is to go into layout editing or advertising ?¢‚Ç¨‚Äú but who knows what tomorrow will bring! Puppetry will always be a part of my life; if I?¢‚Ç¨‚Ñ¢m ever fortunate enough to make a career of it, I certainly wouldn?¢‚Ç¨‚Ñ¢t fight it!

Cameron would like to apologize for the low quality of the videos, but feel free to enjoy “Something That I’m Supposed to Be” in its entirety below!

Many thanks to Cameron for sharing his story with us!

Click here to take the show to Broadway via the ToughPigs forum!