Want a Fraggle in your house without all the hassle of cutting a hole in your wall, then waiting five seasons and 90-something episodes to establish contact? Well, you’re in luck! Boss Fight Figures is now accepting pre-orders for their new line of Fraggle Rock figures. They range between 3 to 5 inches tall, have several articulation points, and come with a bunch of accessories. Let’s take a peak at who’s for sale!

First up, trusty ol’ Gobo. He comes with some extra hands for holding his postcards, a radish, a lantern, his guitar, and a second head, presumably showing the expression of someone trying to figure out what’s cannon between the original show and Back to the Rock.

Then we’ve got Red! She’s also got two sends of hands for holding things, including maracas, her whistle, and her Inspector Red gear! She too has a second head, showing what she looks like after an unfortunate Floop, Bloop, and Whoop accident. I hate when that happens.

Up next, Uncle Travelling Matt! He also has some extra hands to hold his notepad and pen, plus his walking stick, a skateboard, and an Orb of Understanding. Plus an extra head of Matt expressing what it must be to watch the series finale of LOST. I’m right there with him.

Finally, we have some Doozers! There’s the Architect, Cotterpin, and interestingly enough, Cotterpin’s dad Flange Doozer. I say “interesting” because the rest of these figures are clearly based on their Back to the Rock looks, and Flange has yet to appear on that show. I hope this means should this line continue, we’ll see more figures based on characters from the original show. What I wouldn’t give to have a Chuchu Fraggle sitting on my bookshelf.

Click here to have a detachable head on the Tough Pigs forum! 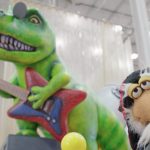