Kermit the Frog Teases “Big Surprise” for the Muppets for 2019

You know, it’s kind of been quiet recently for the Muppets recently. This year, we had some live shows in London and a Carpool Karaoke episode and a smattering of live TV appearances, but that’s about it. Sure, we know the Muppet Babies reboot will return for a second season, but what about the fuzzy, felt-y, fabulous characters we know and love?

Well, we got a bit of a hint that something’s coming in 2019. Kermit the Frog was recently interviewed at Los Angeles’ CBS affiliate, KCAL, to promote “The Wonderful Winter of Oz.” At the end of the interview, the topic eventually turned to the topic on every Muppet fan’s minds, “what’s next?” Kermit responded, “…well, we’ve got a big surprise planned for the new year. I’d tell you what it was, but I don’t know what it is either.” Now, this doesn’t seem like much, but for us, it’s nothing if not an encouraging sign. 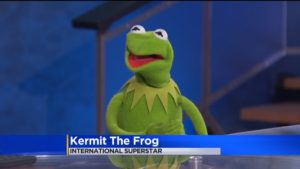 We assure you, it was Kermit and not Constantine being interviewed.

So what could it be? We can say with authority… that we have no clue what it is. Another set of live shows? A live tour? A new special? Maybe even a new movie or TV series? Something to do with Disney+, Disney’s new streaming service launching next year? The return of Muppets to the lids of German chocolate pudding cups? Only time will tell. Nevertheless, it does give Muppet fans reason to look to 2019 with hope.

Click here to assume it won’t be seasons 4 and 5 of The Muppet Show on DVD on the ToughPigs forum!

Watch Fozzie Bear @Midnight Without Staying Up Past Bedtime