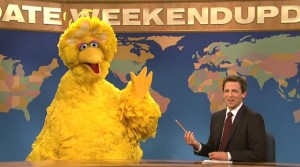 Due to Mitt Romney’s anti-Big Bird message earlier in the week, the tall yellow guy could’ve had his pick of the litter for where he wanted to appear to deliver a message of his own.  Thankfully he chose a show that I actually watch, and more thankfully, he was funny!

Check out Big Bird’s appearance at the Weekend Update desk with Seth Meyers right here!  (And if you’re an international Big Bird fan who can’t see Hulu, try this link instead.)

Click here because he’s Big Bird and you’re not on the ToughPigs forum!