The following article was written by ToughPigs’ own Matt Wilkie! 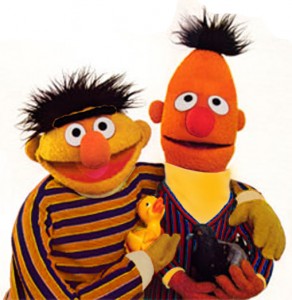 There are two kinds of people in this world: Those who say “Bert & Ernie” and those who say “Ernie & Bert.” And those people who don’t know who those two are, I guess. And those people who just say the yellow and orange guys from Sesame Street who might be gay. Okay, so there are a lot more than two types of people in this world. BUT of the ones who know the characters I’m talking about, they either say “Bert & Ernie” or “Ernie & Bert.”

Is there a difference between the two ways to say it? Grammatically speaking, no. If you’re saying both of their names, and pronouncing them properly, you’ve got all your bases covered. But is there a sociologically proven method to what it means if you’re a Type B & E personality over a Type E & B personality? Not at all! But that’s not going to stop me from writing about my own theory. 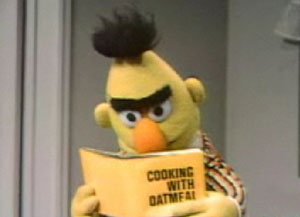 If you’re the type of person who puts pigeon-loving Bert first, you appreciate the simple things in life. Things like paperclips. Argyle socks. Both editions of the best-selling book “Cooking with Oatmeal.” And, of course, la la la linoleum!

Bert is grounded. Realistic. And while to me, “boring” is a 4-letter word, I agree that to some people Bert may be the B-word. However, those who say “Bert & Ernie” would probably say, “Hey! Figgy Fizz Bottlecaps ARE exciting!”

It should be noted that in classic comedy duos, the “straight man” usually goes before the “funny man.” Examples of this include Abbott & Costello, Edgar Bergen & Charlie McCarthy, and Simon & Garfunkel (Who could forget their famous comedy sketch “Who’s on a Bridge Over Troubled Water?” Garfunkel was HILARIOUS in that one!). At the “Sesame Street at 40: A Night of Celebration with the Legendary Cast,” author Michael Davis asked Frank Oz what order he thought should be used, and invoking this time-honored tradition replied, “Bert & Ernie.” 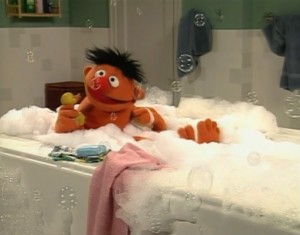 For those more (let’s say adventurous) types who put Ernie first, they’d rather go to a circus or a parade or a birthday party. They’d rather fantasize about living on the moon or underneath the sea than do a dance based on bird-like movements. They’d rather be outside playing baseball and getting dirty, just so they can later rush home to their beloved rubber duckie and soak in their bathtub, Rosie. They appreciate the wild, the wacky, the downright silly.
Ernie-first types are more likely to be outgoing and laughing at anything in life that comes their way. They want to make you laugh, too, whether it’s by initiating a rhyming game or using their artistic skills to make a painting or a sculpture of their best friend – nose optional.

Although Jim Henson was never asked his preference in an interview, Kermit introduces them as “Ernie & Bert” when they appeared on the first season of “The Muppet Show,” and Ernie greets Doc in “A Muppet Family Christmas” by saying “We’re Ernie and Bert.” Having never struck me as being narcissistic, I think it‚Äôs safe to assume that Jim intended for Ernie to go first.

And while every country has their own favorite variation, almost all countries use both ways in different situations. Germany, however, is a strange exception to this rule. There, “Ernie und Bert” is the standard and “Bert und Ernie” is practically unheard of. This just proves my theory that Germany is the standard by which we should rate everything comedic. I mean, have you seen “Das Boot”? Comedy Galore! They really are a laugh riot, those Germans. (Author’s Note: I’m 75% German, and 100% funny, so I know this to be true.)

No matter how you say it, every comedian needs their straight-man. Every Costello needs an Abbot; you can’t have one without the other. But if you’re not sure which one you are, close your eyes and picture these two friends. What feels natural to say to you: Bert & Ernie or Ernie & Bert? And if you’re still undecided, consider this: How good does lumpy oatmeal sound right now? Huh? Think about it.

Suggest Wiki article for further reading: Bert and Ernie vs. Ernie and Bert 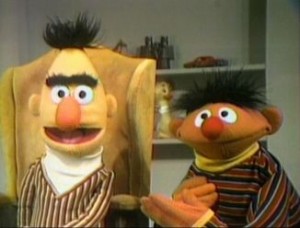 Click here to pull the ol’ switcheroo on the ToughPigs forum!