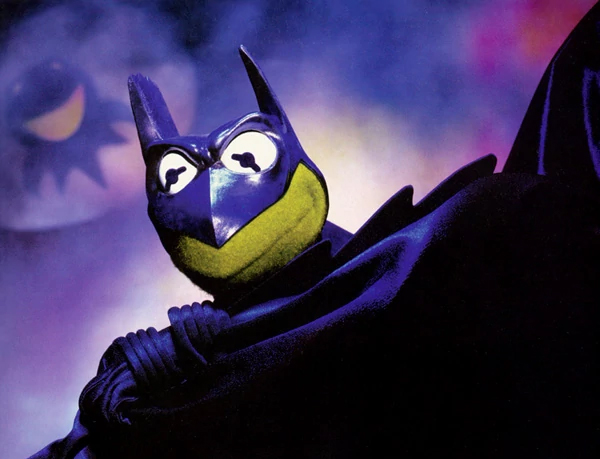 On March 30, 1939, Detective Comics #27 hit comic book stands. That issue featured a cover with a man dressed in black with a cape and cowl that made him look like a bat.  In fact, you may think to refer to him as a Bat-Man.

Yes, Batman is approaching his 80th anniversary.  For eight decades, he’s been invading our comic shops, TV sets, and movie theaters in his never-ending quest to rid Gotham City of the criminal element.  (Although, if he’s still fighting the mentally insane after 80 years and Gotham still isn’t cleaned up, maybe he’s not doing such a great job after all.)

Batman has shared a strong history with the Muppets.  Aside from them all being human/animal hybrids, Batman popped up in a few times in the first season of Sesame Street, and the Jim Henson Creature Shop provided digital visual effects for the film Batman Begins.  That doesn’t even begin to cover the dozens of references the Muppets have made surrounding the Bat-franchise.

In honor of this momentous occasion, we’re looking back at all (okay nerds, most) of the notable Batpersons throughout the years and asking ourselves, “If they were a Muppet, which Muppet would they be?”  Yeah, it’s a weird question, and completely unnecessary, but here we are asking it anyway.  What are you gonna do. 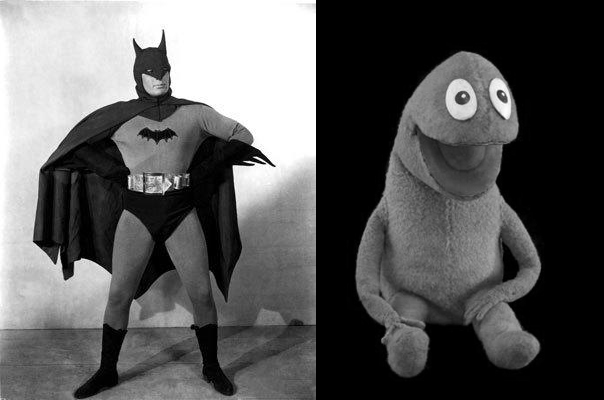 As the first on-screen representation of the Caped Crusader, Lewis Wilson (in 1943’s Batman) and Robert Lowery (in 1949’s Batman and Robin) have one thing in common.  Okay, two: black and white.  So their Muppet doppelgänger has got to be someone who fits all the criteria of 1) being super old, 2) in monochrome, and 3) willing and able to throw a batarang at someone.  And that Muppet is Wilkins.  Then again, the ultra-violent Wilkins would probably end up in Arkham Asylum himself. 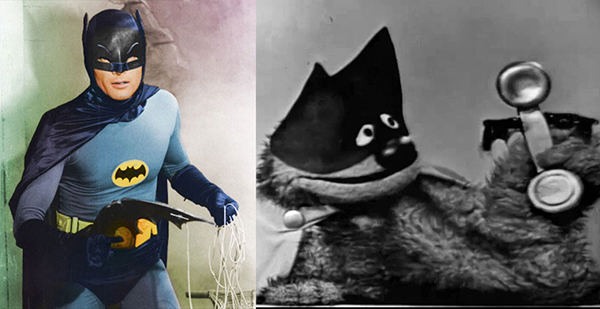 The first TV star Batman was Adam West from the 1966 series.  And the first TV star for the Muppets was Rowlf the Dog.  But that’s not where the similarities end – both are quick with some well-timed wisdom, and they love music (never forget the infamous Batusi). One thing they don’t have in common – Adam West’s Batman has eyebrows, while Rowlf has none.

The titular character in the 1989 Batman and it’s sequel Batman Returns really represents both ends of the Batman spectrum – he can act silly like the Adam West Batman, but he’s also incredibly stern and violent like later Batmen.  In fact, most of what I think of from Michael Keaton’s performances as the Dark Knight are how different his Batman is from his Bruce Wayne.  Batman is ruthless, while Bruce Wayne is a little aloof.  He’s one of few Batmen who really seems like a different person from his secret identity.  That’s why our choice for this one is actually two – Bert and Ernie.  Ernie will gallivant with supermodels and run Wayne Industries while Bert jumps around on rooftops and fights clowns.  That works for me.

I mean, talk about a dynamic duo. 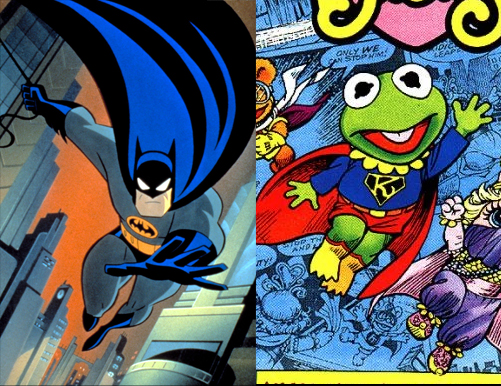 What might be the greatest ever representation of Batman (and will likely never be topped) is the animated Batman series from the 1990s.  This Batman, voiced by Kevin Conroy, embodies all of the purest elements of the character.  For our pick of this Batman, we looked toward the world of animation.  Unfortunately, there are only a few options for cartoon Muppets, and the purest might be Baby Kermit from Muppet Babies.  Batman and Kermit are two of the most recognizable characters in pop culture history, and their most famous animated forms are made for each other. 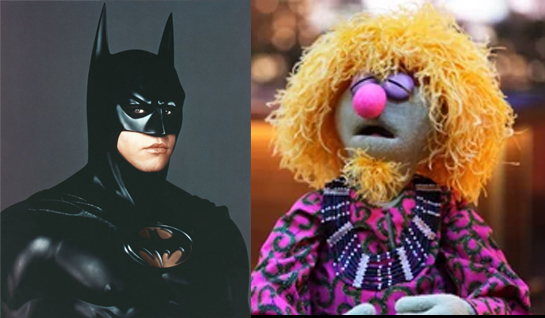 The main takeaway from the Batman of Batman Forever is Val Kilmer’s pronounced lips.  So naturally, his Muppet counterpart is the Electric Mayhem’s resident trumpeter Lips.  Yep, that’s what we’re going with.

Batman and Robin is a ridiculous movie.  It features a ton of corny one-liners, bright colors and silly stunts, and it’s generally remembered as more of an oddity than a superhero movie.  And where there’s an oddity, you’ll generally find Gonzo.  And remember, the George Clooney Batsuit featured the strange costume choice of nipples, much like the Tin Thing in Muppets Wizard of Oz.

Besides, Gonzo is such a Clooney type. 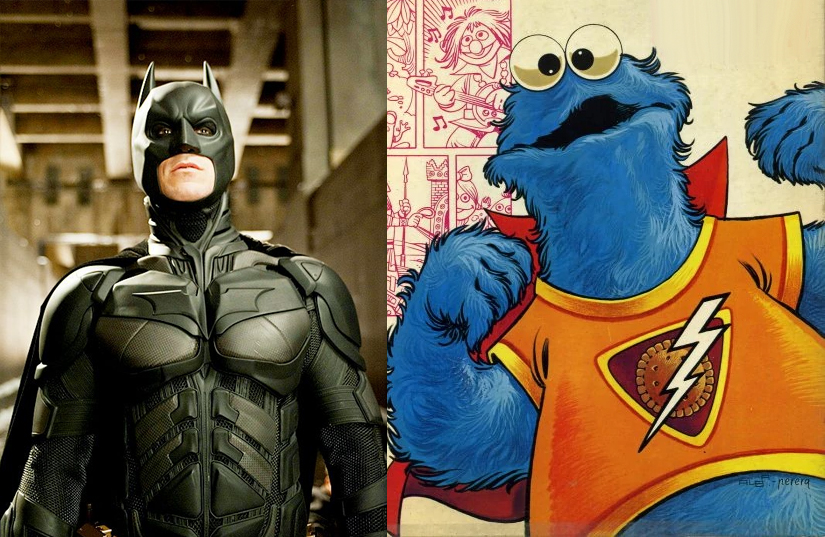 Close your eyes.  Picture Batman shouting, “WHERE’S RACHEL”.  Open your eyes.  It was Cookie Monster all along.  Are you surprised?  You are not. 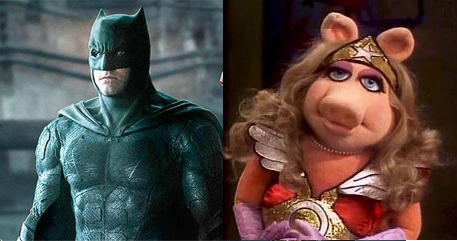 The Batman of Batman v. Superman was unnecessarily violent.  He probably killed a bunch of henchmen. He even picked a fight with the person who should be his best friend.  Meanwhile, Miss Piggy karate chops Kermit on a daily basis.  She’s a huge star like Ben Affleck, but without the ego.  Just kidding, she’s got enough ego to rival the entire Affleck family.

The proto-Batman of Gotham is a 12-year-old child (portrayed by David Mazouz).  So of course, his Muppet is also a kid, but one that will never actually grow old enough to become Batman (because, you know, puppets) – Robin the Frog.  And considering we’ve never seen his parents, maybe they went the same way as Martha and Thomas Wayne?  If only Bruce had an uncle like Kermit, maybe he wouldn’t have gone into the vigilante lifestyle.

On second thought, maybe Robin would make a better sidekick for Batman.  Maybe it’s something about the name… 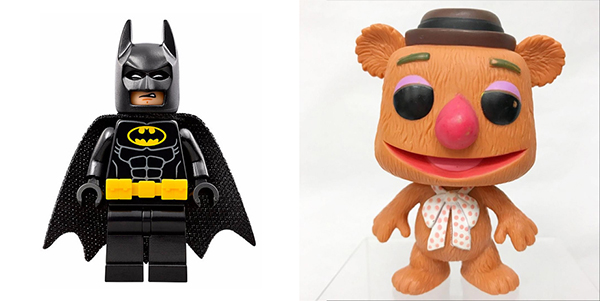 I don’t know man.  Maybe, like, the Fozzie Bear Funko Pop?  Who cares.

Click here to strike terror into the heart of the ToughPigs forum!