Two of the biggest pop culture loves of my life are Muppets and comic books.  And while I spend just about every day writing about Kermit the Frog and company, I don’t get many opportunities to talk superheroes.  Now with that big Batman v Superman: Dawn of Justice movie in theaters, inspiration is beginning to creep in, and we’re ready to jump on the superhero movie clickbait bandwagon.

Despite poor reviews, and the near-guarantee of disappointment, I went to see Batman v Superman in the theater on opening day.  I’m just that kind of nerd.  Sometimes a fan just has to bite the bullet and watch their childhood friends punch each other until one of them falls down.  And that’s pretty much exactly what you see in the film (sorry, spoilers), which is boring and uninspired.  Wouldn’t it be way more interesting to see them compete in a completely different way?

Who says the fight has to be fisticuffs?  I have a much better idea: Let’s pit them against each other in the world of Muppets.

Batman and Superman have both been spoofed and referenced many times by the Muppets, and one of them is bound to have better references than the other.  There’s only one way to find out who wins this battle: By using my own superpowers of Muppet blogging!  Super Muppet Fanatic Powers Activate! 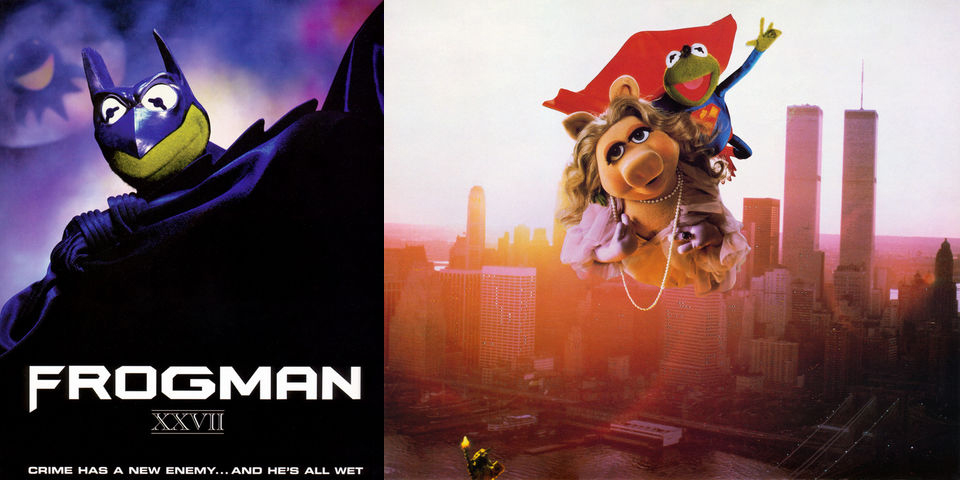 Kermit as Batman vs Kermit as Superman

Of any character, Kermit is the most versatile Muppet who can look natural in a bat cowl or blue tights.  He stretched his cosplay talents as each character for a few calendar photo shoots, separated by a decade and a half (Superman in 1982, Batman in 1997).

The Winner: Batman.  While the Superman shot has the added bonus of Piggy as Lois Lane, it also has the disadvantage of looking like a sloppy Photoshop job. 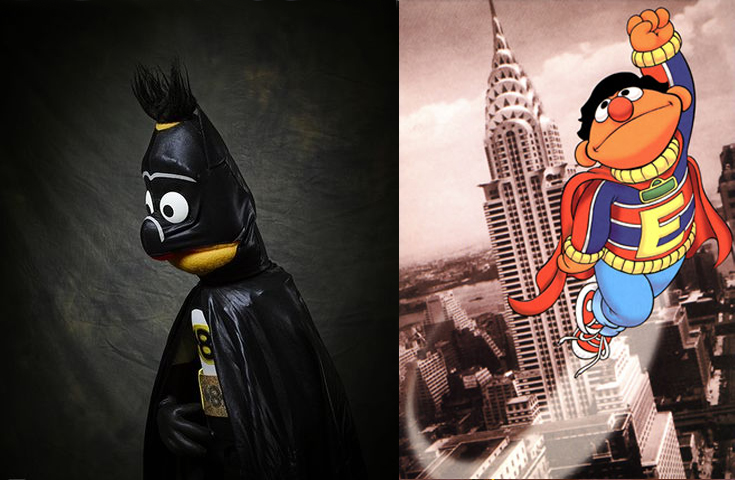 Bert as Batman vs Ernie as Superman

In one of my favorite Sesame Street episodes in recent years, Bert made an appearance as The Caped Crus-8-er, an overly-specific spoof of Adam West’s Batman from the ’60s.  Meanwhile, Ernie took flight as Superman in some German Sesamstrasse merchandise, including a set of curiously inappropriate shot glasses.

The Winner: Batman.  It’s hard to compete with that excellent Bat-Bert costume. Drawn-on eyebrow and all.

Elmo as Batman vs Super Grover

The next-best known Bat and Super-themed Muppets probably fall to Elmo as The Dark Nine (again, from the Numeric Con episode of Sesame Street) and smarter-than-a-speeding-bullet Super Grover.  While Super Grover is obviously way more beloved, his Superman connection mostly ends after his first appearance, when his alter ego is revealed as ace doorknob salesman Grover Kent, who changes into his costume in a phone booth.  After that, he becomes another cape-wearing, flying superhero with a chest emblem, much like just about every other comic book character.  He even gets less Superman-ish in his 2.0 incarnation, which even comes with a Batman-inspired car and searchlight signal.  Meanwhile, Elmo’s Dark Nine is Batman through-and-through.  This contest is much closer than it appears.

The Winner: Superman.  Sorry Elmo, but nobody can beat Super Grover.  And he is cute, too.

Kermit isn’t the only one who dressed as both characters.  But you probably wouldn’t have guessed that the other was Muppet Babies‘ Baby Gonzo.  In the very first episode of the series, Gonzo jumps into the TV and transforms into Super Gonzo, and then he jumped in a Batmobile for a stint as the Dark Knight in the seventh season.

The Winner: Batman. Bat-Gonzo gets to sing a whole opera while riding around in the Batmobile, which is something I’m not sure the real Batman has ever had the guts to do.

Hey, did you know that both Superman and Batman were animated on early episodes of Sesame Street?  It doesn’t matter if you knew or not, it’s true.  Superman taught the important lesson that the letter S is rad as heck, and Batman watched as the Joker neglected to look both ways before crossing the street and get hit by a car.

The Winner: Superman. In the Sesame Street test pilot, Superman fought a giant gorilla and turned to the camera to shout, “D!”  Ain’t nothing more educational than that.

Possibly the best-known Superman connection to the Muppets is Christopher Reeve on The Muppet Show.  Not only is it full of Superman references, but it’s one of the best episodes of the series.  Meanwhile, the best Batman-connected guest star is probably Mark Hamill, who provided the voice of the Joker for years in various Batman cartoons.

The Winner: Superman. Despite not banking nearly as many hours as his comic character, Mark Hamill’s Muppet stuff is almost all Star Wars-related, while Christopher Reeve is Superman through and through. 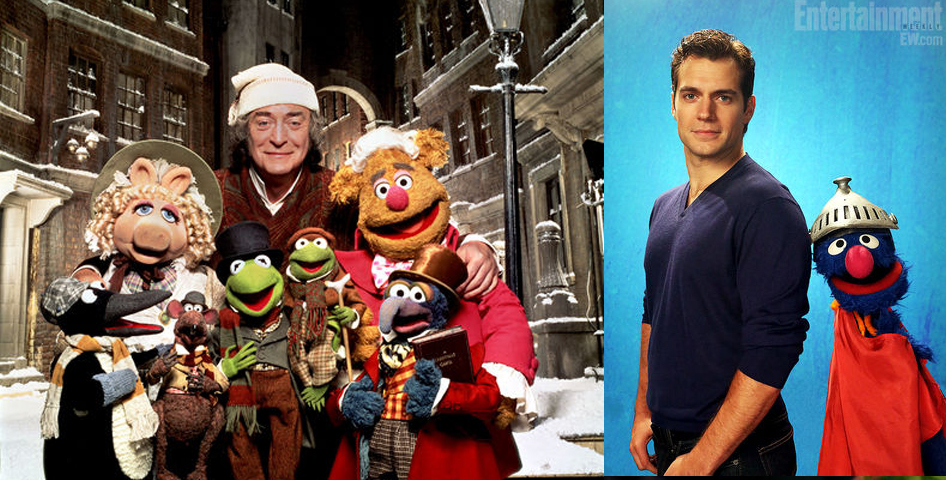 The Winner: Batman. As you can see, one of those lists is much larger than the other.  For a loner, Batman sure does surround himself with a lot of people. 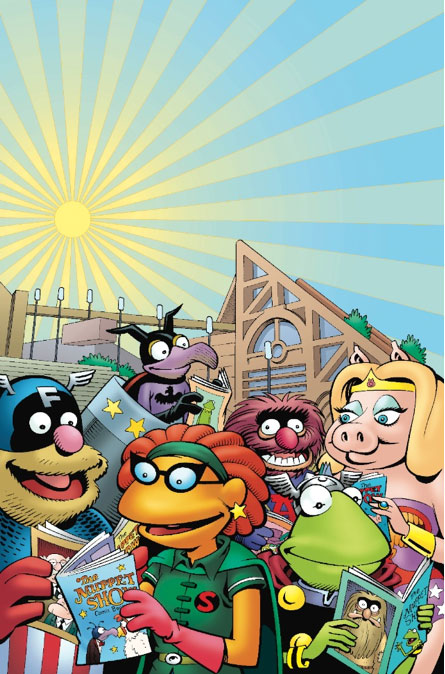 Gonzo as Batman vs Animal as Superman

Back in the day, when we were lucky enough to have a regular Muppet Show comic book, we also got a variant cover featuring the Muppet characters as various comic book superheroes.  Fozzie Bear is Captain America, Kermit is Thor, and Batman and Superman are there courtesy of Gonzo and Animal

The Winner: Batman. Animal’s pretty well hidden back there, while Gonzo nails those giant ears.

Muppet Folks at the Movies

Get ready, this one’s a stretch.  Jim Henson’s daughter Lisa serves as the Senior Vice President of Warner Brothers while Tim Burton’s Batman and Batman Returns were released into theaters.  Frank Oz appeared in a deleted scene in Superman III as a surgeon.  So who has a better minuscule connection to the superheroes?

The Winner: Superman.  Frank was in a Superman movie!  Even if it only exists in a DVD bonus feature, that’s pretty rad. 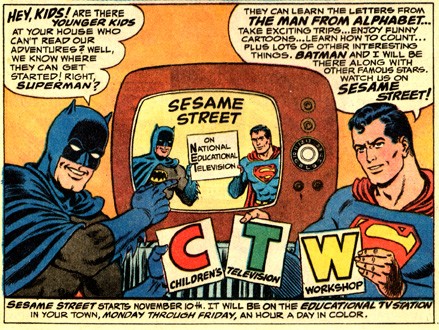 Isn’t it weird that Superman and Batman appeared in an ad for Sesame Street?  These days, I feel like those roles would be reversed.  But choosing a winner here will be tough, since they’re pretty much doing the same exact thing.

The Winner: Superman.  Notice how Batman is pointing directly at himself?  That’s some serious Bat-ego.

It’s a pretty close race!  So in the all-important Muppet comparison contest, which of the World’s Finest comes out on top? 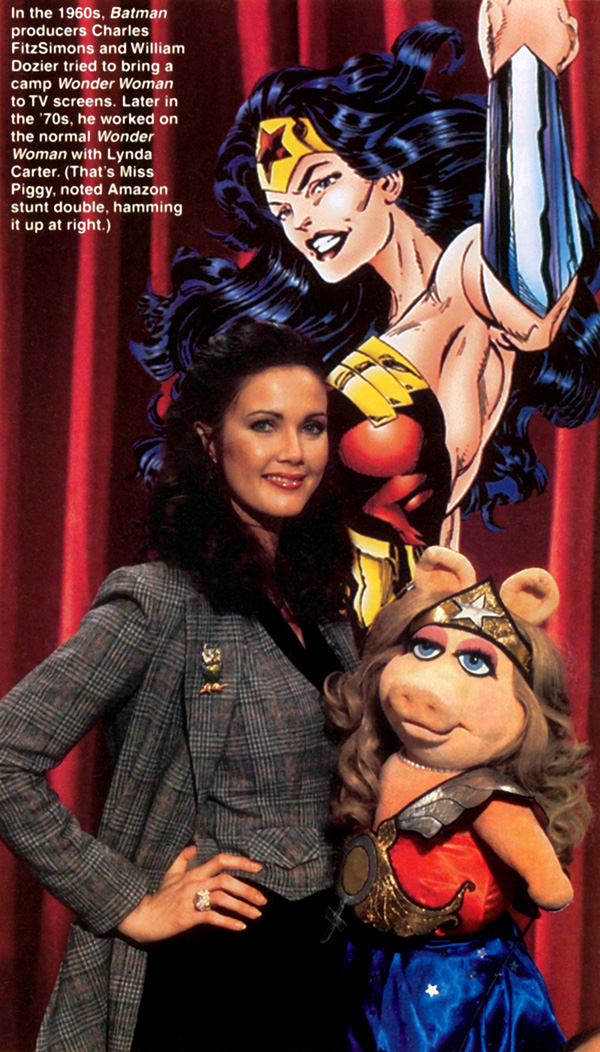 Surprise: Our winner is Wonder Woman!  From Lynda Carter’s stellar episode of The Muppet Show to Miss Piggy’s alter ego Wonder Pig and Abby Cadabby’s One-da Woman, the Amazing Amazon takes the cake while Batman and Superman are busy scowling at each other.

And just like the actual Superman/Batman fight, the end result of this contest is all but meaningless.  That’s comics for ya!

Click here to fight in tights on the ToughPigs forum!