We are saddened to learn that Barbara Walters – iconic journalist and television personality – has passed away.

In addition to her hosting duties on programs such as 20/20 and The View, she also crossed paths with the Muppets on several occasions.

Most notably, we remember Walters for appearing in the opening of Sesame Street‘s 25th anniversary special, “Stars and Street Forever”, in which she reprimands Sully for changing the marquee from “20/20” to “25/25”.

Walters was also quoted on the back cover of the album “The Year of Roosevelt Franklin”, and she later hosted the annual Sesame Workshop Gala in 2005.

On the Muppet side of things, Walters interviewed Kermit and Miss Piggy during their appearances on The View, and again in the 2012 special “Best in TV”.

With the Muppets being as famous as they are, it’s no surprise that the most famous of all journalists would cross paths with them over and over again. And we’re grateful to count Barbara Walters among those who receive that honor.

Click here to help us remember Barbara Walters on the ToughPigs forum! 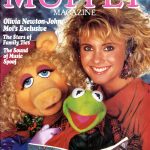