Today in Things That Exist: The Muppets Band-Aid App 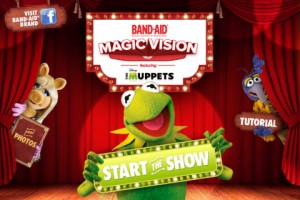 This January, Band-Aid released Muppet-themed bandages, made specifically for cuts and bruises found on the bodies of ToughPigs readers (we’re a scrappy bunch).  As if anyone needed more incentive to buy such an amazing product, Band-Aid has just launched an app to help promote it.

Available in the iPhone and iPad, Band-Aid Magic Vision Starring Disney’s the Muppets (that’s a mouthful!) allows you to scan one of your Muppet Band-Aids (or the box… it’s not really picky) and then play a mini-game with Kermit, Piggy, or Gonzo.  When I say “mini-game”, I mean really mini.  As you’ll see in a second. 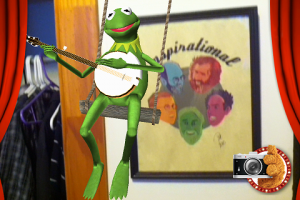 The Kermit portion has Kermit singing a verse of The Rainbow Connection.  When you move your iPhone, Kermit can sway back and forth or forward and back. 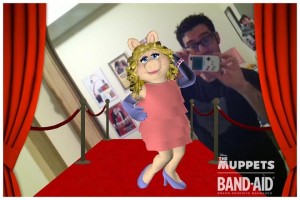 Piggy’s segment has her posing for pictures.  You can tap the photo icon to take pics (and you can do this at any point in the app) with your background of choice. 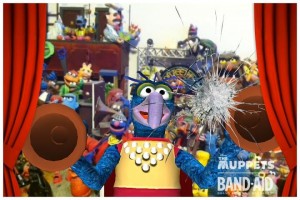 Gonzo accidentally attaches to (and cracks) your screen, and you have to shake to get him off.  Of course, he meant to do that.

For a free app with some simple graphics and audio, I was pretty pleased with what I got.  I ended up buying a box of Band-Aids, so I guess the promotion worked.  But even if you don’t want to shell out a few bucks, you can print out a picture of a Band-Aid directly from the app to scan at your leisure.

Click here to get the app, and try not to hurt yourself while doing it.  But if you do, I have some extra Band-Aids to help you heal.

Click here to get a paper cut on the ToughPigs forum!

Fraggles? There’s an app for that!

Pose with Piggy, Goof off with Gonzo

It’s Curtains for the My Muppets Show App