“Listen” can be one of the simplest lessons to learn, but not always the easiest to teach. In an age where everyone seemingly wants to share their opinions with the world, knowing when it’s time to let someone else have the proverbial floor can be a challenge. That’s why I don’t really mind that a number of episodes in the first season of Fraggle Rock: Back to the Rock seem to boil down to that message, variations on the theme coming down to reasons why we need to listen.

“Red and the Big Jump” teaches us “listen, because consent is important.” “The Merggle Moon Migration” teaches us, “listen, because facts aren’t the same as feelings, and otherwise you’ll get stuck in your own personal echo chamber, which may be a cave with echoing spirits that feels like it’s auditioning for the inevitable Labyrinth reboot.” But because this is such an important message, there’s certainly room for another version of this moral, and that’s exactly what we get in the ninth episode, “The Giggle Gaggle Games.”

Picking up from the end of “Craggle Lagoon,” the Craggles have been invited to stay at Fraggle Rock while The Wisest Fraggle Council works to figure out a solution to the crisis. (But much like a ToughPigs staff meeting, this devolves into a debate on food and inappropriate jokes. And because he’s in Australia, we spend most of our time trying to get Jarrod to appear right-side up.) The Fraggles are well-meaning, but nothing they do seems to connect with the Craggles.

Mokey, unsurprisingly, takes a deep interest in her new neighbors. She acquires a book on Craggles, and decides to kick off an event they’re sure to love: the multi-sport festival known as (ta-da!) The Giggle Gaggle Games. Gosh, they sure seem to resemble some other major sporting event going on right now!* The whole thing is a bust, and the Craggles decide to sleep it off in a nearby cave. Luckily, a letter from Uncle Traveling Matt reminds Mokey to listen to the Craggles and ask them what they’d like to do.

When Mokey and her friends arrive at the cave, Lyle explains to the Fraggles that the Craggles do like to play, but they do it in a dream state, which allows them to do things they could never do in the real world. Also, Mokey’s book has some bogus information, and was clearly written by someone who had never actually met a Craggle. Everyone learns more about Craggles, Mokey learns an important lesson about listening to and including others in the decision-making process, and silly creatures who enjoy writing learn about the importance of fact-checking and having a good editor.**

And while it’s important to show the positive impacts of the message, I think it’s just as important to show what happens when our stubbornness goes unchecked, which dovetails nicely into the B-plot. While the Fraggles learn their lesson, the Doozers really don’t. The manufacturing of Doozer sticks and towers is going full steam ahead using the newly-discovered pink goo, to the consternation of Cotterpin, who firmly believes that more testing and research is needed before the Doozers “think pink.” But her concerns fall on unlistening ears, and production goes on. Feeling ignored, she unwittingly shares her frustrations on a live Doozertube, which happens to reach Doc’s Bluetooth speaker.

Doc, on the other hand, is also having trouble being heard as she deals with her landlord, Mrs. Schimmelfinney. As Doc finds a kindred spirit in Cotterpin, she’s inspired to push through, and ultimately gets her point across. I sort of like how the barriers between worlds aren’t quite as strong as they were in the original series. As our world becomes more interconnected, it seems appropriate that theirs should be as well. Meanwhile, a Cotterpin/Doc teamup isn’t something I ever expected to see in this show, but I’m rooting for them to eventually get to meet face to face. Who knows what their talents could create?

All in all, the importance of communication, inclusion, and inclusion within communication may not seem like a unique point to make, but it’s certainly a crucial one for young folks today, and one that seems paramount in the world of Fraggle Rock. The only way to make a more equitable future is to involve everyone in the process, and the writers on this show definitely get that. It’s why I think this show is incredibly relevant, and managed to exceed my wildest expectations.

Of course, I think the Gorgs might want to do a little listening of their own. That fountain Pa orders Junior to build looks like it could lead to some serious trouble. What will happen to the Fraggle ecosystem with a water shutdown? Will the Gorgs ever learn to share what they have? Will the Doozers finally take a second look at that goo? And can someone help Barry Blueberry off that cliff?

*Provided you read this review before February 20th. Otherwise, you’ll have to wait until Summer 2024 for this reference to make sense.

**Editor’s Note: I can’t tell if that’s a compliment or an insult. You can explain it to me while we try to flip Jarrod’s video feed.

Strongest Moment: Boober selling Radish-ade. Such a simple (and well-used) joke, but darn if it didn’t make me giggle.

Weakest Moment: Barry Blueberry popping up at every appropriate and inappropriate moment to work his emcee charm.

MVF (Most Valuable Fraggle): Despite what I just said, I’m going to give it to Barry Blueberry, mostly because he tries so hard to insert himself into the events of the episode. He deserves a win.

The Grand Return Of…: Shared dreaming, previously seen in the 1984 episode “Boober’s Dream.”

Classic Musical Moment: Lyle leads the Fraggles in a reprise of “Dream a Dream (and See)” during their shared experience on the dream plane.

New Musical Moment: Mokey sings the show tune-inspired “Same Light” early in the episode to show just how similar Fraggles and Craggles are. It’s a nice song that shows her good intentions… as well as her ignorance to the nuances and differences between the different groups.

Coolest Puppetry Effect: It’s something so simple, but the editing really has me believing that Uncle Traveling Matt threw that tennis ball.

Special Appearance By…: Ed Helms, who becomes the first celebrity guest star to appear in multiple episodes this season as he reprises his role of Lyle.

Darkest Moment: Icy Joe makes a joke about eating Doozers. I mean, I know it’s just a joke, and she comes from an earlier time, but I don’t want that image in my head.

One More Thing…: Early in the episode, Wembley, unable to decide what to show the Craggles, says “you ever wish you could parachute outside your body and be like, ‘You’re on your own, pal?” In a way, in entering the dream realm to play, he does just that. That’s some neat foreshadowing by the writers!

Okay, One More Thing…: The Gorg fountain only begins to flow water when Junior drops a stone that clogs the drainage that leads to the Fraggle waterfall. Now, I’m no expert in Gorg technology, but if the water flows up to the spout and back down into the pond, do they have mechanical pumps to recycle the water? If not, aren’t they just asking for their yard to be flooded? Methinks Pa and Junior didn’t think this whole thing through.

Click here to speak into the void on the ToughPigs forum! 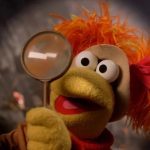