The Art of Caroll Spinney Comes to Pittsburgh 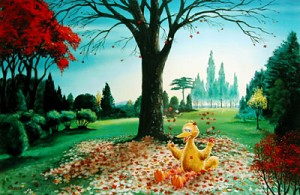 If you’re a bigSesame Street geek, you know that Caroll Spinney is not just a talented puppeteer and unicycle rider, he’s also a swell cartoonist. He drew Big Bird’s portrait of Mr. Hooper, he wrote and illustrated the 1976 book How to Be a Grouch (which is full of great cartoon drawings of Oscar and his relatives), and his characters Picklepuss and Pop appeared in Muppet form to show kids how to draw in the Jim Henson Play-along Video Wow, You’re a Cartoonist. The guy has been drawing all his life… and now somebody’s had the bright idea to turn his art into a museum exhibit.

ToonSeum is a museum in Pittsburgh that’s dedicated to the art of cartooning, which means it’s way better than the Guggenheim or the Louvre or any other boring, non-cartoon museums. Beginning this weekend, they’ll be featuring all kinds of artwork by Caroll Spinney, from paintings of Big Bird, to t-shirts and greeting cards designed for the Sesame cast, to his early comic strip efforts. The exhibit runs from November 6, 2010 through January 30, 2011, and it all gets off to an auspicious start at 6:30 PM on the 6th with a fund-raiser event called KA-BLAM!, which will be preceded by a VIP reception featuring “a conversation with Caroll Spinney.”

If you live in or near Pittsburgh, you have no reason not to go see this exhibit. You can check out the ToonSeum website for more details, and buy tickets to the fundraiser at ka-blam.org.

Click here to draw Mr. Hooper on the Tough Pigs forum. And hey, have you seen our video interview with Mr. Spinney?

Center for Puppetry Arts to Honor Caroll Spinney on May 5