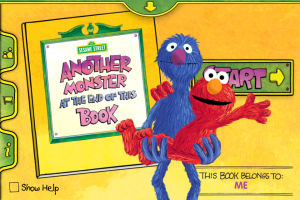 A while back, Sesame Workshop released an interactive iPhone/iPad/iPod Touch app of their literary classic A Monster at the End of This Book, and this week they’ve followed it up with an app of the book’s 1996 sequel, Another Monster at the End of This Book.  It features the voices of Grover and Elmo, new animation, and “intuitive finger-tapping” for the little ones.  I could tell you who the monsters at the end of the book are, but I don’t want to spoil anything.

You can buy the app on the iTunes Store right now at a special introductory price of just 99 cents, which is less than I paid for a bottle of chocolate Nesquik today.  And the app will last forever, unlike the Nesquik! We’ll have a full-fledged review right here on this website soon, so keep an eye out for that. And in the meantime, keep an eye out for monsters.

Click here to turn the page, despite Grover’s pleas, to the Tough Pigs forum!