We are saddened to learn that Al Gottesman – Jim Henson’s attorney – has passed away.

This may not seem quite so newsworthy to you, but Gottesman’s contributions to Jim Henson’s career and legacy were imperative, helping to craft the Muppets’ presence from behind the scenes.

Gottesman began working as Jim Henson’s personal lawyer in 1970 – an important time for Jim, who had just begun making huge waves with Sesame Street. In 1972, Gottesman joined the staff of The Jim Henson Company as general counsel and head of business affairs. As we all know, Jim had a very specific philosophy about doing business that wasn’t too common, with beliefs about retaining ownership, supporting staff, and building profit to fund passion projects. To accomplish any of these, he needed a legal team that could support his ideals, and Al Gottesman was the man for the job.

Gottesman continued working with Jim Henson through the rest of Jim’s life, navigating the company through Sesame Street, The Muppet Show, the Muppet films, and beyond.

In 1992, Gottesman became a founding member of the Board of Trustees for The Jim Henson Legacy. He served as President of the Legacy for a time, and he worked closely with the Henson family as the executor of Jim’s estate.

Despite never making an on-screen cameo in a Henson project, “Dr. Gottesman” was name-dropped as Sprocket’s veterinarian in the Fraggle Rock episode “Boober’s Quiet Day”.

You can read Gottesman’s recount of meeting Jim Henson for the first time on the Jim’s Red Book blog, which also provided the image seen above.

As you can tell, Al Gottesman was an important part of Jim Henson’s life, career, and legacy, and none of the projects and productions we love so much would be the same without him. Thanks for your service, Al – you will be missed.

Click here to help us remember Al Gottesman on the ToughPigs forum! 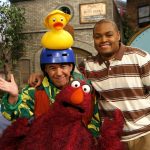