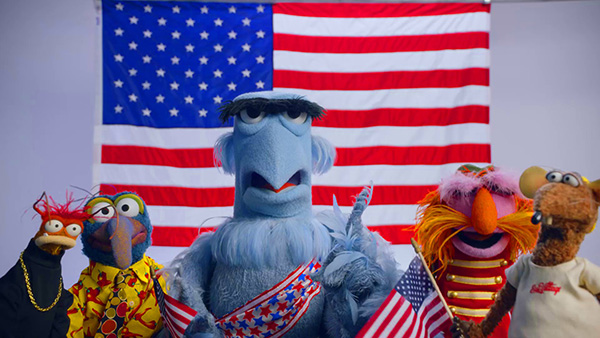 Happy Independence Day, Muppet fans! We’ve made our way halfway across America with the Muppets in part 1 of this celebration, and now it’s time to continue our tour. But before we continue, I want to mention a bonus clip for an important part of America in Muppet history.

It didn’t seem right to have a Muppet celebration of the fifty states and not include Washington, DC, where Jim Henson got his big break at WRC-TV with his first television show, Sam and Friends. And seeing that Washington, DC is one of the major journalistic hubs of the country, here’s a clip from Sam and Friends featuring the voice of one of Washington’s most famous reporters, David Brinkley.

Kingsland, Arkansas is the birthplace of music icon Johnny Cash, who once caught the attention of Oscar the Grouch with the song, “Nasty Dan.” It still surprises me that the “Man in Black” would perform with the Muppets, but he apparently had a good time, as he would also guest star on The Muppet Show in 1981.

In its heyday, the Pony Express originated out of St. Joseph, Missouri. On the other hand, this Monsterpiece Theater sketch has a full grown horse, and stretches the joke out about as long as it can.

Fozzie Bear attempted hibernating in Maine in The Muppets Take Manhattan… which means if he found a cave near the fictional town of Moose Patrol, he may have brushed shoulders with Fenwick la Touche, a contestant on What’s Prarie’s Problem?

Sure, the Pilgrims may have been heading towards Plymouth Rock, but if they had heard about the U.S. Space and Rocket Center in Huntsville, America’s largest Peanut Festival in Dothan, and a minor league baseball team named in honor of biscuits, you could bet that they would be Alabama bound.

Before he became the sixteenth President of the United States, Abraham Lincoln was a United States Representative from Illinois from 1847 to 1849. And 150 years after he took office as a Representative, his likeness was used for a surprisingly violent robot on Muppets Tonight. Truly, a dignified tribute to one of America’s greatest leaders.

It would be easy to post The Gogolala Jubilee Jugband’s performance of “Mississippi Mud” from the Phyllis Diller episode of The Muppet Show here. But Mississippi holds a very special significance for the Muppets, for it was on September 24th, 1936, in the town of Greenville, Mississippi, a baby named James Maury Henson was born, and without Jim Henson, there would be no Muppets, and therefore, no ToughPigs, and this piece would not exist. So in honor of Mississippi’s contribution to Muppetdom, here’s “Jim Is” from Henson’s induction into the Television Academy Hall of Fame in 1987. Thanks, Mississippi, and thanks, Jim.

Believe it or not, The State of Indiana once had an appearance in Episode 15 of Statler & Waldorf: From the Balcony, which means that it’s lost to time. In lieu of that, here’s a clip from Sesame Street Presents: Follow that Bird where Big Bird gets lost in the fictional town of Toadstool, Indiana’s Tournament of Mushrooms Parade. It’s no guest appearance by a whole state, but hey, when life gives you mushrooms, have a parade! (Or make a pizza. Your call.)

When you think of Louisiana, probably the first place that comes into your mind is New Orleans. And when you think of New Orleans, you probably think of Dixieland and New Orleans jazz. I’ve been fortunate to visit New Orleans, and I can tell you, arguably the most requested song any time I heard a jazz band play when I was there was “When the Saints Go Marching In.” It’s kind of a New Orleans standard. And naturally, the Muppets put their own spin on the song with Hal Linden when he guest starred on The Muppet Show.

The good news: There actually is a town called Morrow in Ohio! It’s about thirty miles northeast of Cincinnati. The bad news: you cannot take a train to Morrow and get back again today. Mostly because Morrow doesn’t have a train station anymore.

I know today is about how America declared its independence from Great Britain, but I can’t help but think about The King. Thankfully, we’re up to Tennessee, home of the King of Rock and Roll. Now, don’t have a suspicious mind about who it is. On Muppets Tonight, the gang loved him tender with a reenactment of the creation of the Declaration of Independence, a document that told King George III that he wasn’t nothin’ but a hound dog. Blue Suede Shoes!

Kentucky is the home of Fort Knox, home to much of America’s gold reserves. To date, there have been no sighting of Dr. Bunsen Honeydew or Beaker at Fort Knox. As the clip above suggests, that’s probably for the best (unless you really love cottage cheese).

Feeling hungry? Like maple syrup? If you do, might I suggest a trip to Vermont, the nation’s leading producer of maple syrup! And what goes better with maple syrup than flapjacks? Jam? Well, maybe if you’re Prince. Which I highly doubt you are.

Now that we’re heading into the original thirteen colonies, let’s really get into the patriotic clips! Fun fact: The composer for “America the Beautiful,” Samuel A. Ward, was a descendant of Samuel Ward, a governor of Rhode Island and a representative to the Continental Congress! If that isn’t patriotic, I don’t know what is!

Since his debut in 1975, Sam the Eagle has appeared in every Muppet movie, including Muppets from Space, which was filmed in Wilmington, you guessed it, North Carolina. Here’s a compilation of great Sam moments that will make Tar Heel Staters smile from Charlotte to Lumberton!

There were a number of reasons why I picked this as the New York clip. West Side Story, the musical where the song “America” comes from, is set in New York. Stephen Sondheim, the lyricist, was born in New York. Leonard Bernstein, the composer, was the longtime conductor for the New York Philharmonic. But perhaps the most important to me was that the international jam session reminds me of New York’s Ellis Island, where generations of immigrants landed as they made America their home. For many, New York was the gateway to the Great American Melting Pot.

Virginia has given us many important Americans. George Washington. Nat Turner. Lewis and Clark. Booker T. Washington. Ella Fitzgerald. Sandra Bullock. But perhaps one of the most well-known people connected to Virginia is Thomas Jefferson, third President and writer of the Declaration of Independence. And thanks to Sesame Street, we now know that Jefferson had some cute, furry, and lovable help writing that fateful document.

In this clip, Sam the Eagle sings a song by The Guess Who, a Canadian band. New Hampshire is also be the last state on this list that happens to share a land border with Canada, so they get the clip. Congratulations, New Hampshire! Have better Muppet connections next time, whydon’tcha.

In this clip, Sam the Eagle is caught off-guard when Walter, Janice, and Floyd perform a respectful rendition of “The Star-Spangled Banner,” which was inspired by poet Francis Scott Key witnessing the British bombardment of Fort McHenry in Baltimore, Maryland during the War of 1812. Naturally, this clip is a perfect fit with the birth state of America’s national anthem.

(In case you didn’t know, Boston happens to be in Massachusetts. If you know your state capitals, then you probably did. And good on you for knowing the state capitals!)

Spoiler alert: Big Bird is not happy that he isn’t picked to be the national bird. But since Big Bird’s longtime performer, Caroll Spinney, happens to a resident of Connecticut, I think that that’s worthy of dedicating this clip to The Nutmeg State. (Seriously, one of Connecticut’s state nicknames is The Nutmeg State. There’s nothing wrong with that, I just think it’s cool.)

It’s been a hotly debated point between Muppet fans as to where the swamp where Kermit grew up is located. A 1978 draft of The Muppet Movie’s script simply says “a swamp in the deep south.” Several Muppet projects have referenced it as being the Okefenokee Swamp, which straddles the Georgia-Florida border. A Time Magazine article on the making of the film and the official New York Times review claim the swamp is in Georgia, where supposedly filming of the movie’s swamp scenes occurred. I’ve always believed that there is no Muppet canon, so the swamp doesn’t have a set location. It is where the project needs it to be. But in the case of The Muppet Movie, I’ve always believed it’s in Georgia, so it gets a patriotic clip from the film in commemoration of the start of Kermit’s journey. (And hey, there’s Mount Rushmore again! I could’ve used this when I was working on South Dakota!)

On Christmas Day, 1776, George Washington lead American troops across the Delaware River into Trenton, New Jersey, leading to a surprise attack on Hessian troops and a decisive American victory at the Battle of Trenton. And much like Jefferson’s work on the Declaration of Independence, Grover was there to help. Come to think of it, he was clearly instrumental to the careers of two of our first three Presidents. Grover may very well be the first political kingmaker in American politics!

The Declaration of Independence was ratified in Philadelphia on July 4th, 1776, and that’s how we got Independence Day. It would be pretty foolish not to include the Muppets’ interpretation of this historical event from the 1982 special I Love Liberty in this playlist, now wouldn’t it? (It also helps that 1776 is one of my favorite musicals, and Muppets are one of my favorite things ever.)

So after all this, we’ve finally made it to the final clip. This one goes out to Delaware, whose citizens I’m sure enjoy a big musical finale. Happy Independence Day, Muppet fans!

Click here to stand for the patriotic part on the ToughPigs forum!