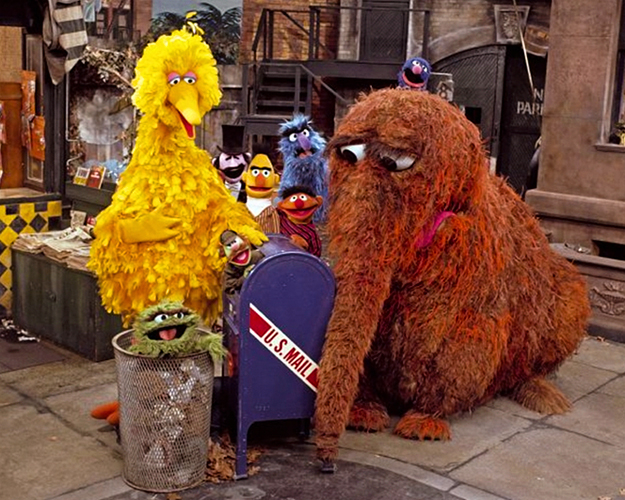 Hey everybody, it’s Season 5! In the five years since Sesame Street premiered, the show has found its groove and much figured out what it’s going to be. You might think that now would be the time for a show to rest on its laurels and play it safe. But that show wouldn’t be Sesame Street. Reinvention is part of the show’s lifeblood. Now that everything’s set, the writers can really play around and have some fun! And that’s what I think Season 5 all about. It might not look like it on initial appearance, but Season 5 is a secretly epic season of Sesame Street. 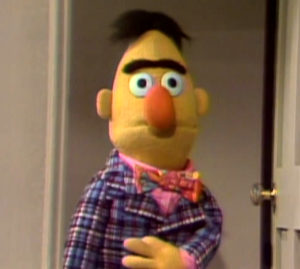 I don’t know if you can tell, but this is Bert’s brother.

The storylines seem bigger, and in some cases, they seem to be pushing characters out of their comfort zones. In one episode, Big Bird causes some minor accidents at Hooper’s Store. Does he try to fix his mistakes? Does he try to hide his mistakes so no one notices? Nope, he decides the only way out is to run away from Sesame Street. (Spoiler alert: he never actually leaves because he’s got too many things he wants to take. A great lesson for dealing with mistakes, I know.) The writers are also clearly having fun revealing different characteristics and backstories of characters. Cookie Monster looks for a job! Bert’s got a twin brother named Bart who likes to travel by way of Buffalo! (But next time, he’ll try an airplane. Wha wha wha wha!) A witch tries to foil Oscar’s plans to make mischief by cursing him with the most terrible thing possible: a nose! Oscar the Grouch has a nose! Terrifying, huh?

But then, there’s the secret identity that would shape both Sesame Street’s history and my own: for Season 5 was when somebody, deep in the bowels of the Children’s Television Workshop, had a fateful idea: “You know who would be a funny superhero? Grover.”

And thus, a legend and countless Comic Con costumes were born. 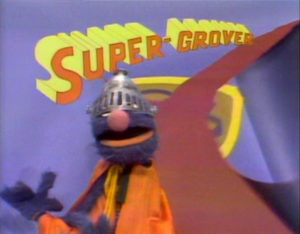 Can I just take a moment to discuss how awesome Super Grover is? That was rhetorical. It’s my article, so don your capes and helmets, everybody. When you distill down who he is, Grover is a monster who loves to help people. Whether he’s a waiter, salesmonster, or an Old West marshal, Grover has chosen a life of service. An admirable aim, for sure. But let’s be honest, there are times where our will to help surpasses our abilities.

But what if we could exceed our natural abilities? What if we could be… super? Would it change who we are? That’s why I love Super Grover: the superpowers don’t change him. He’s still the lovable monster who wants to help any way he can. All that changes is that he can fly. (Not well, but flight is flight.) His real superpower is the love and care he has for everyone. He tries his best (and isn’t always successful), but you never once doubt his sincerity. And that’s a superhero I’m proud to be a fan of.

Okay, getting back to the epicness (epicicity?) of Season 5. This is a season that peels back the layers of these characters and pushes them in new directions. I have a theory as to why: the curriculum for Season 5 was focused on emotions and feeling, and getting children to recognize different ones. So, in a way, they pretty much had to push these characters to get them to express these feelings. It’s kind of a big life lesson: life is crazy. Things will happen to you that will get you feeling sad, angry, afraid, and yes, even happy. And you know what? That’s okay. The sooner people recognize emotions, means the sooner we can learn to address them. And that leads to empathy. And when we’re more empathetic, the kinder we are, and the better the world is. Sesame Street doesn’t just teach us letters and numbers. It teaches us to be good people. Epic, indeed.

Notable Character Debut: Beyond Super Grover, Season 5 featured the debut of Biff and Sully, those delightful pair of construction workers. And while the Twiddlebugs were first mentioned on the show in Season 2, the Twiddlebug Family first graced television this season.

Notable Character Departure: As mentioned last week, this was Hal Miller’s second and final season performing Gordon. On an unrelated note, that new film, Willie Dynamite, looks really gritty. Boy, I’d sure be nervous seeing that guy walking down Sesame Street! But more seriously, behind the scenes, this would be famed Sesame Street composer Joe Raposo’s final season on the staff. He left to pursue other projects (including The Muppet Show: Sex and Violence and The Great Muppet Caper) and would contribute occasionally to the show, before returning full-time as music director in 1983.

MVM (Most Valuable Muppet): His super alter-ego aside, Grover really steps up his game in Season 5. He also has a romantic moment with a snow-female-Grover (not Grorie), and becomes a safety monitor for all of Sesame Street. You just can’t keep that monster down! (If anything, he’s more likely to fall down on his own.) 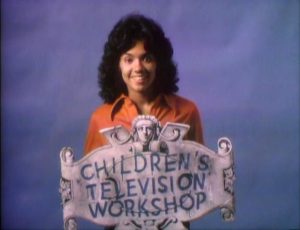 (Yes, this is from Season 7, but this was her first solo credits tag!)

MVH (Most Valuable Human): Speaking of stepping up their game, you know who else really stands out? Maria. Between going skiing, dating David, and kissing Officer Krupky (more on him in a bit), Maria is stepping into the spotlight in a big way!

MVE (Most Valuable Episode): Did you know that Season 5 was the first time Sesame Street did a multi-episode arc? From February 5th to the 15th, 1974 (Episodes 0592 to 0600), Sesame Street was struck by a heavy bout of snow, and writers managed to create nine episodes involving snow and cold weather. From Bob drawing the letter U in the snow to Big Bird mailing an icicle, Sesame Street was home to winter fun. (Hey, that anniversary is Tuesday! Happy 45th anniversary, multi-episode Sesame Street story arcs! Thanks for meaning so much that one episode simply can’t contain you!)

Other Notable Episodes: Episode 0584. Before there was Veggie Monster, there was Apple Monster.

Classic Sketch Debut: Remember when Bert’s head is traced by an omniscient purple marker? That happened in Season 5. 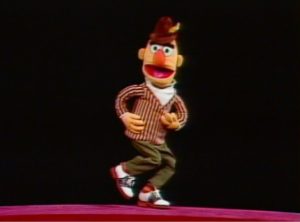 Classic Song Debut: The season premiere alone gave us two classics going in very different directions: first, there’s the stream of consciousness jive of “Fat Cat,” and then, there’s the very decidedly square and beautiful vaudeville of Bert performing “Doin’ the Pigeon.” So whether you’re hip to the groove or grooving with birds, there’s something for everyone.

Curriculum Focus: As mentioned above, emotions and feelings are the focus in Season 5, showing off an arrangement of stories to match these emotions. Pride, fear, love, anger, sadness, happiness, and surprise are all highlighted.

Musical Highlight: Dipping slightly into the Best Celebrity Moment category, when a music icon visits Sesame Street, you have to pay respect, and respect must be paid to Johnny Cash. The Man in Black traded his wardrobe for a blue denim shirt when he sang “Nasty Dan” to Oscar the Grouch.

Best Celebrity Moment: In a beautifully sweet moment, Lena Horne and Grover share a tender moment when they sing “How Do You Do?” It’s got an important lesson, a great song, and a kiss. Feel free to use the celebrity couple name Grena Horver if need be.

One More Thing: Remember Officer Krupky from before? Originally, Krupky was a Muppet, but in the episode I referenced, he’s played by a human, who was none other than Frank Oz! And there’s not a picture or a video of Oz’s performance to be found! It would be Oz’s only onscreen cameo on Sesame Street. How cool would that be to see? 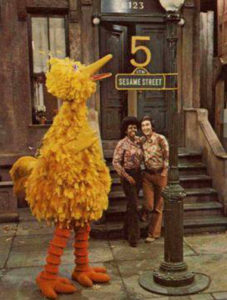 Click here to be faster than lightning, stronger than steel, and smarter than a speeding bullet on the ToughPigs forum!