Ryan Dosier – Today stars a new four part article series celebrating Sesame Street‘s monumental 45th anniversary. To celebrate, I thought it would be fun (if not inherently difficult) to ask 45 different Sesame Street cast members, crew members, and fans to discuss one of their favorite moments from the show over its four and a half decade run. We have some really exciting contributions from some incredible people coming in these installments, so you have that to look forward to! I can’t thank everyone who contributed enough for their efforts.

The four installments will each contain 11 moments, with the last one having 12. But without any further ado, let’s jump into our list of 45 incredible Sesame Street moments!

1.   “Captain Vegetable” – chosen by Patrick Cotnoir (Muppet Mindset contributor)
Captain Vegetable is probably my favorite Sesame Street moment purely for the fact that its the first moment from the show I remember. It was on one of the compilation “Best of” cassettes I had as a kid. Jim, Jerry, Richard all in their prime. Hilarious. Sums up Sesame really well I think: teaching kids lifelong lessons while still sneaking in jokes for the adults.

2.   “Put Down the Duckie” – chosen by Connor Asher (Muppet Mindset contributor)
One of my favorite segments from Sesame Street would be “Put Down the Duckie.” I first heard the song when I was a kid on a Sesame album and have loved it ever since. From being a kid to a full-adult, I still adore the song. It’s a beautiful performance by Kevin Clash as Hoots the Owl, and Jim Henson as Ernie.

3.   “If These Steps Could Talk” – chosen by Julia Gaskill (Muppet Mindset contributor)
It took a lot of brain wracking, but I have to say my favorite Sesame moment is when Gordon and Big Bird sing the song “If These Steps Could Talk.” It’s a scene that has stuck with me ever since I was little. The appreciation of places that might not seem momentous but have strong sentimental value is a notion I greatly appreciate, especially when those memories of sentiments are shared with family and friends. It’s a sweet song and an even sweeter moment in Sesame history.

4.   Kermit & Joey Sing the ABCs – chosen by Matt Wilkie (Muppet Mindset contributor)
Short but sweet. It’s a quick clip. It doesn’t even take more than a minute to happen. But in that minute, you’ve got the full range of emotions that a Muppet and Kid scene can convey. It’s funny – hilariously so. It’s kind and gentle and treats the little girl, Joey, with respect while showing how silly kids can be when they say the darnedest thing. Kermit’s reactions to that unexpectedness is priceless. And it ends on a moment almost heartbreakingly sweet. It’s one of the most perfect things in the world. And it’s over in 58 seconds. Short but sweet.

5.   “The Word is No” – chosen by Michael Wermuth (Muppet Mindset contributor)
This was a music video-style song from season 20, sung by Gina and Maria. It’s a fun song about the word no, with appearances by many characters and great visual effects. As a kid, I liked it but can’t pinpoint why, but as a fan of ’80s music videos and ’80s music, I can enjoy it more because it’s like an ’80s music video. And besides, it’s got Maria and Gina!

6.   Bert & Ernie Go Fishing – chosen by Jarrod Fairclough (Muppet Mindset staff member)
This is a sketch that epitomizes the Ernie and Bert dynamic. Ernie is cool, calm and relaxed, and ultimately he gets what he wants. Bert is uptight and stiff, and just can’t catch a break (or a fish), even when he tries to be more like his best friend. Also, whenever I get a text, my phone yells “HERE FISHY, FISHY, FISHY” at me, and I laugh every time.

7.   “Alligator King” – chosen by Lucas Ross (Muppet Mindset contributor)
I love the Alligator King. I really like the song structure and the animation style. The big horns and jazz banjo. The kid’s voice at the end is perfect.  When I was a child I cringed when he bites the rubies and his teeth fall out. I still do just thinking about it. I’ll often be working on writing a song and subconsciously play this one. I’ll think, “Hey I wrote this… nope. That was Alligator King.” I guess it’s just ingrained in my brain.

8.   “Gimme Five” – chosen by Ryan Roe (ToughPigs.com administrator)
One of the joys of being a grown-up Sesame Street fan in the YouTube age is the opportunity to discover and rediscover long-lost classic segments from the show.  I have no memory of seeing “Gimme Five” when I was a kid, but since I found out about it just a few years ago, it’s become one of my favorite Sesame songs.  I’ve always liked the human characters almost as much as the Muppets, and this five-centric smooth groove is a particularly great Muppet-free spot.  The brilliance of the show is also evident in the fact that the song funny and catchy and entertaining even if you’ve never heard of “Float On” by the Floaters, but if you have, it becomes hilarious.

9.   Paul Rudolph (Vocal Music Director for Sesame Street)
One my favorite moments from taping Season 45 was when my parents got to be extras! They traveled from Illinois with two good friends via Amtrak. My mom sat in front of Hooper’s store with her friends, my dad played basketball with Chris and Leela. It’s one of those pinch-myself moments that I think, “I watched this show when I was a kid and now my parents are on the show.” Mind blown.

10.   A Photo with Ernie – chosen by Louis Henry Mitchell (Associate Design Director of Special Projects for Sesame Workshop)
This was never meant to be shot. I was preparing to pose armatured Photo Ernie for a photo shoot and when I raised his head his eyes met mine and I was just overwhelmed with JOY that I hugged him!!! Thank goodness Jeffrey Price thought to leap toward the camera and get the shot!! What I get to do feels like a DREAM every single day… but go ahead and pinch me. IT’S REAL!!!

11.   Big Bird in China – chosen by Dave LaMattina (Director of I Am Big Bird: The Caroll Spinney Story)
My favorite moment is actually from Big Bird in China. I love that special. And while I love it all, when I think about it, I always first think of that iconic shot of Big Bird and Xiao Foo on top of the mountain looking down over the valley.  I think part of the reason I love that shot is that I remember watching it as a kid.  It was a primetime special and I was allowed to stay up to watch it. For that same reason, I love Don’t Eat the Pictures–both were these special memories I have of my family gathered around the TV.  But China always stood out to me.

We’ll be back with more moments from Sesame Street‘s 45 years in the coming days! Be on the lookout!

Sesame Street Through the Years: A Study of the Evolution of the World’s Most Famous Street 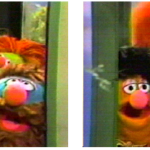