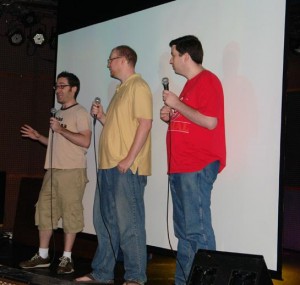 As many of you know (because we wouldn’t shut up about it), we at ToughPigs (along with the MuppetCast) held a Muppet fan get-together this weekend in Brooklyn, New York. “The Muppet Vault” was held at a bar called the Knitting Factory, and we showed lots of great Muppet videos, gave away prizes, sang a few songs, and had an all-around amazing time. We had a whopping 75 attendees, which was about 72 more than we expected (y’know, after Joe, Ryan, and Steve). But because one or two of you couldn’t make the trek to Brooklyn, we thought we’d give y’all a recap on the events of the day, and then you can pretend you were there too! But sorry, you won’t get to take home any of the prizes.

The event began at 2:00, and people began to filter in about 15 minutes earlier. Having absolutely no idea how many people would show up, we scattered 20 chairs around the room. And then 20 people showed up, with more people behind them. So the first part of our day was filled with frantically setting up folding chairs, trying to keep up with the flow of the incoming crowd. Young people, old people, families, kids, hipsters, and I think maybe a grizzly bear were all interested in seeing Muppets on the big screen. And for only $5 a head, neither man nor bear could turn us down. 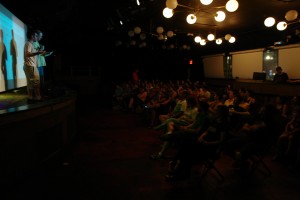 Ryan, Steve, and I took the stage and introduced ourselves, hoping the audience would somehow remember the URLs to our websites and bookmark ToughPigs and the MuppetCast. (A special hello to all of you who remembered us!) A little bit of witty banter later, and we were off with our first video: The Muppets at Walt Disney World. That special turned out to be the perfect opener, since it is equal parts hilarious, toe-tapping, and nostalgic. Even the current Disney starlet Raven-Symon?É¬© got a gasp or two from the kiddies who don’t remember her from her Cosby days. Even back then, she was So Raven!

In between each video, we jumped back on stage for more banter, to answer some questions about whatever it was we just watched, and to receive some undeserved applause. We also took the opportunity to give some Muppet stuff away, but only if the fans deserved it. During our first break, we asked some trivia questions to the kids, and they won Fraggle Rock plush dolls, Kermit books, and Emmet Otter CDs for knowing things like the name of Elmo’s goldfish, Fozzie Bear’s catch phrase, and Bert’s favorite kind of bird. We were very proud to see the young ‘uns show off their Muppet fandom.

Video #2 was a short compilation of videos from Muppets Studios’ recent YouTube vids. “Ode to Joy” and “Habanera” got a great response (as expected), but the audience really ate up Big Mean Carl’s “Stand By Me”. (There’s something about that pleading bunny…) And of course, there are few things in life more enjoyable than seeing an audience’s reaction first-hand during “Bohemian Rhapsody”. It’s such an amazing video, but like most things, it’s even more amazing when you share it. 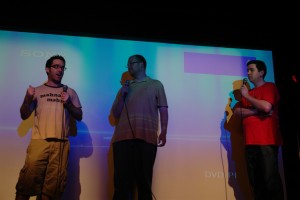 In our next break, we upped the ante on the trivia, asking questions to adults who might not be as fanatical about the Muppets as you or I. We gave away DVDs and more books to people who knew things like the names of the two old guys in the balcony, what Doozer sticks are made of, and the members of the Electric Mayhem. Once again, we were pleased to see our fellow Muppet fans show off their trivia skillz for some free swag.

The next video was a compilation we made of some of the funniest Sesame Street skits we could find. Cookie Monster guessed what was in Kermit’s “mystery box”. Grover and John-John counted to ten. Oscar and Danny DeVito had a laughing contest. Ernie and Bert shouted “Here, Fishy-Fishy!” Grover tried to sell sunglasses to Kermit, and Kermit responded with one of his patented freak outs. And our audience was reminded that Sesame Street used to be funny first, and educational second.

Our final bout of trivia was aimed toward the superfans. We had a feeling there would be a few at the event. We rewarded these fans, who knew things like Hilda’s performer, Fozzie’s joke writer, and all four original Sesame Street humans, with some slightly heftier prizes. The best of which were two framed prints of Dave Hulteen‘s “The Immaculate Jim“, which Dave generously donated to our event. Dave also went above-and-beyond by bringing along a stack of smaller prints of some of his recent illustrations to give away to the attendees. That Dave Hulteen really is a superstar!

The next video was Miss Piggy’s Hollywood, which aired as the second half of a Jim Henson Hour episode. People enjoyed seeing what we thought Hollywood was like in 1989, filled with the hottest stars of today like George Wendt, Justine Bateman, and Dudley Moore. Unfortunately, none of these celebrities made it to the Muppet Vault event. 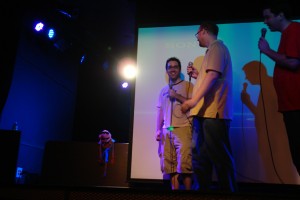 A special guest joined us on stage for our last break. The Electric Mayhem’s own Animal must’ve fallen asleep backstage after too many “Fozzie Navels” (the drink special of the day). But we woke him up to help us with our next segment. Three audience members came on stage to show off their very best Muppet impressions, and Animal acted as our celebrity judge. The impressions consisted of Beaker, Baby Beaker, and Fozzie Bear. And it didn’t really matter what the impressions sounded like, we all knew the kid was going to take home the prize (season 3 of The Muppet Show!). It was a good thing Animal didn’t join in the contest, because he then went on to do a perfect imitation of Kermit the Frog. Animal then primed the crowd by leading everyone in a rousing call-and-repeat chorus of “Mahna Mahna”, which segued directly into our final video.

We ended the day with “It’s Not Easy Being Green“, the Muppet Sing-Along video. The audience followed the bouncing ball and sang along to tunes like “Movin’ Right Along”, “Octopus’ Garden”, and “Heat Wave”, but were more or less lost on Billy Bunny’s “Frog Talk” and Rowlf’s “In a Cabin in the Woods”. Still, who doesn’t like singing along with Muppets? And it was a great way to end the day. 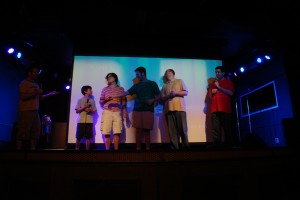 We want to thank everyone at the Knitting Factory for their hospitality, assistance, and for taking a chance on a few blokes from Liverpool like us. Specifically, thanks to Jerm, John, and Rob for all their help. Also, thanks to Dave Hulteen for coming through with some awesome giveaways!

But most importantly, thanks to everyone who made the trek out to Brooklyn for the show! We couldn’t have done it without you! Well, we could’ve, but it would’ve been really sad.

And stay tuned for more events from ToughPigs and the MuppetCast in the near future! 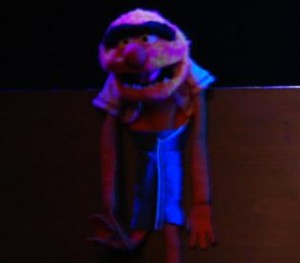 Click here to pretend that’s the real Animal on the ToughPigs forum!

Muppeteers at Dragon Con 2015 (or, How I Cried In Front of Oscar the Grouch)