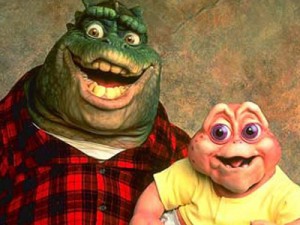 Dinosaurs follows the adventures of a nuclear family of, well, dinosaurs. Father Earl (voiced by Stuart Pankin, who you know as that one guy from that one thing), mother Fran (voiced by Jessica Walter, who would later play a very different type of TV mom as Lucille Bluth on Arrested Development), demanding baby Baby (voiced by Elmo), self-absorbed daughter Charlene (voiced by Sally Struthers, in between All in the Family and Gilmore Girls), and level-headed son Robbie (voiced by some fellow).

The show’s lack of subtlety is one of the things it is best remembered for, and it wears that attitude proudly on its sleeve. Dinosaur society is presented as an early version of our current one — ideas that we take for granted are often presented as brand new. This leads to some good comedy, as we will see later in this episode.

(Before we go on, I should point out that I was surprised and pleased to see that this episode was written by Victor Fresco, who went on to create two of the all-time great satirical sitcoms, Andy Richter Controls the Universe and Better Off Ted. The episode even features a commercial for Earl’s heartless employer, WeSaySo Corp., which sounds an awful lot like a Veridian Dynamics commercial from Ted, pushing the holiday sentiment that “wasteful and demeaning regulations” prevent the company from serving its customers.) 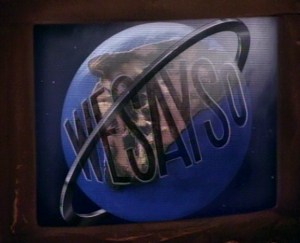 Anyway, back to the episode. Refrigerator Day is, as its name suggests, a holiday commemorating the invention of the refrigerator. As we find out in an expository speech from Fran and Grandma Ethyl, since the fridge allowed dinosaurs to store food for long periods of time, it made civilization possible. Baby doesn’t understand the true meaning of the holiday, but he sure understands that it means he gets presents!

The early scenes focus heavily on the commercialization of winter holidays. Fridge Day, unlike Christmas, has no deeper meaning at all, since it focuses on the creation of a product. We also see a TV commercial sung to the tune of the holiday classic, “We wish you a happy fridge day, so come in and buy Paint!” Robbie, the Lisa Simpson of Dinosaurs, wonders if that doesn’t cheapen the holiday.

His father has no such reservations. Earl is counting on his Fridge Day bonus to pay for the presents he has already purchased. But like countless other TV dads before him, Earl does not get his holiday bonus. Since the Sinclairs have no money to pay for the gifts, their refrigerator is repossessed.

This means it’s time for another series of sledge-hammer jokes about how heartless companies are! The repo man scolds Earl for being half a day late with his payments, adding, “On time, we could overlook, but half a day? It’s outta here!”

Without the fridge, Earl is a wreck. Distraught, he sings the paint commercial version of “We Wish You a Happy Fridge Day,” wishes his infant son respected him enough to beat him over the head, and announces that he’s going out to the garage to hang himself. This is easily the episode’s funniest sequence. The combination of Pankin’s pained vocals, Bill Barretta’s sad-sack movements, and Mak Wilson’s facial expressions add up to a hilarious portrait of a man in despair. 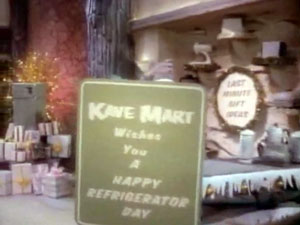 Fran decides to save the day and get back the fridge by inventing the concept “the return policy.” She, Robbie, and Charlene take the gifts back to Kave Mart. The salesman is skeptical, saying that “we have tons of this junk. Why would we want to buy more from you?” Fran eventually convinces him to buy the gifts back for less than wholesale, which allows Fran to buy only a small Styrofoam cooler.

To lift her family’s spirits, Fran decides it’s time to hold their annual Fridge Day pageant, which resembles a Thanksgiving Pageant. The characters are essentially dressed as Pilgrims, and the holiday celebrates the discovery of a way to store food.

The pageant, “The True Story of Fridge Day,” provides plenty of laughs. After the father of an “ancient family” hears a voice which tells him to build a box that is cold inside, he sets about building one. His son is impressed, calling it, “A good and mighty box; a hearty and just box!” Then they ceremoniously plug the box into the wall, which allows it to keep things cold! It’s a Fridge Day Miracle!

With the pageant completed, and Earl’s Fridge Day spirit restored, the man from Kave Mart returns the family’s refrigerator and all of their gifts. It turns out that his supervisor really liked the idea of a return policy. In the episode’s final jab at corporations, the boss thinks that it will “give us the edge we need to crush our competition, become a monopoly and serve you better.” Fran signs over the rights to the concept, the family gathers around the refrigerator, and everyone has a wonderful holiday.

That includes the audience. Over the years, Dinosaurs has become a neglected member of the Jim Henson Company family, remembered only for Baby hitting Earl in the head with a pan. That’s too bad, because it remains a sharp, funny satire. Yes, it is specifically parodying American life in the early 1990s, but things haven’t changed all that much. This episode is a fine example of Dinosaurs done well, and it’s sure to get you into the holiday spirit, whether that holiday is Fridge Day, Tweeznax, or The Festival of the Bells. 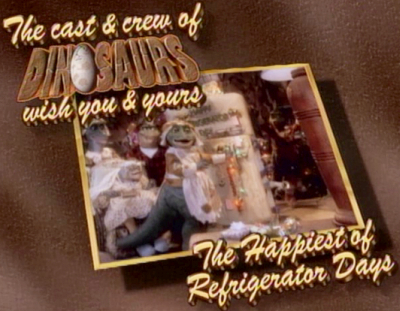 Click here to come in and buy Paint on the Tough Pigs Forum.